A tripping we will go 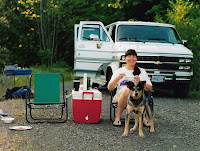 Peggy and I camped this week for the first time in two years, which was when my shoulders started hurting so bad that I had to sleep in a chair. Before then, we camped for a couple of nights a week. Camping and hiking was practically our life until bad knees eliminated the one and bad shoulders the other.

I knew I would have to take narcotics to sleep, only they could have killed me because I suffer from sleep apnea. This meant that I had to take my CPAP (a machine that keeps me breathing), but to take my CPAP, I had to buy some big and noisy equipment to power it. Not good, especially in the confines of a van.

We camped atop 2,130' Saddle Mountain in the Coast Range. The summit is at the end of a deeply rutted dead-end road, and we’ve camped there many times. It’s the kind of place we like because it has a good view, and we never see anyone.

Narcotics work best when you take them before you need them, so, at bedtime, I took a 50 mg Demerol. Well, wouldn’t you know it, my legs started flopping around like balloons in a windstorm while the rest of my body was trying to go to sleep, so I took an anti-seizure drug called Requip a half hour later. I had never mixed the two, but I had never been told that I shouldn’t either. An hour later, my legs were still flopping, so I took a second Requip. An hour after that, the pain was getting pretty bad, so I took a second Demerol.

I was tired of lying awake while the battery that was powering my CPAP expended its energy, so I let this one dissolve under my tongue for fast results. I got them. KABOOM! KABOOM! KABOOM! The sweat poured off me in buckets. I felt weak. I felt shit-faced. I was a mess. I hate it when these things happen. I especially hate it when they happen on the top of a mountain in the middle of nowhere. And I really and truly and especially hate it when, at the very moment these things happen, I realize that I’m going to have diarrhea.

What I most wanted NOT to do despite my sorry condition was to awaken Peggy because, nurse though she is, Peggy is prone to freak out when she thinks her husband is dying, and I MUCH prefer to freak out alone. But, and it was a big BUT, I had no idea if I could walk, or, if I could walk, if I could walk without staggering right off the top of Saddle Mountain. YES, I COULD walk, I discovered. Ooops, I forgot my glasses I realized halfway to the pot. Oh, well, I knew I could find my way without them—I just couldn’t see the stars. 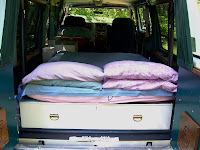 I felt MUCH better after I was done—much, much better. I lay back down with a feeling of accomplishment, of peace, of enlightenment even. Then, like a big heavy hand, the Demerol covered me, and I couldn’t have crawled out from under it had I tried. I almost dozed before the sweat awakened me again—and again, all night long. At 3:00 a.m., the ants arrived. The damn things tickled me as they crawled up my legs, but I knew better than to think they were real despite the fact that some HUGE ants HAD gotten into the van.

I had to admit, given this fact, that MY ants could have been real, but there was something about the WAY they crawled they make me think otherwise, and I really, really didn’t want to wake Peggy up looking for them. It was a long night. An ant would be there, and then it wouldn’t. Sometimes, there would be a lot of them—a whole herd almost—and I would remember stories about the screams of white men whom the Indians staked out on top of anthills. I really didn’t like those ants on my legs, but then you probably knew that already. 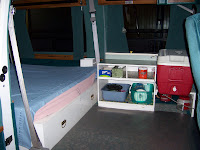 The worst drug experiences I’ve ever had were on Demerol, yet there’s something about it that intrigues me. I guess I’m a little—maybe a lot—like the guy in the old Fabulous Furry Freak Brothers cartoon who quipped—about LSD—“2,130 bad trips, but I’m not giving up yet.” I don’t think LSD ever killed anyone though (directly, anyway), whereas I KNOW Demerol has. Its dangers are why it’s not much prescribed anymore, but I’ve got A LOT of it, and “waste not, want not,” I always say.

“Does ‘waste not, want not’ mean you eat rotten food, your silly boy?” my mother would have asked. “Well, yes, Mom, of course, it does, which I especially hate when something is so far gone that that the dogs won’t eat it.” I would say stuff like that to my mother, and she would believe me. You might think she would have caught on after being bull-shitted for decades, but she lived her whole life like a naïve fourteen year old. Maybe this was because she equated being good with not seeing things that she considered bad, and she considered a lot of things bad—men, for example.

Demerol isn’t an opiate. It’s 100% human made. What kind of a person comes up with a thing like that, do you suppose? I mean, opiates came to us in the same way as aspirin. Something in nature was found to work, so scientists set about trying to figure out which chemical in the natural substance (willow bark in the case of aspirin) was the active one. But Demerol was thought up by some dude sitting around a lab in a white coat. Why did he do that? To drive me crazy, no doubt. But he won’t, ha, ha, ha, ha. He’ll never get me, that psychopathic lab dude with the evil dribble on his chin. I am WAY too normal. 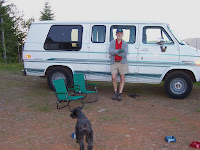 My worst experience with Demerol happened when I double-dosed after my first shoulder surgery. I was in bad shape for several days in the middle of winter. I felt like I was DYING for several days in the middle of winter. THAT’S the kind of bad shape I was in—like the life was draining out of me—but it never occurred to me to ask for help. I was all alone—Peggy being in North Carolina—and, because I had been reading the Old Testament before I took the Demerol, I just kept right on reading. Freaked me out bigtime. I mean, the horror of ants eating your eyeballs is NOTHING compared to the horrors inflicted by the Old Testament God, and the Demerol had left me excruciatingly vulnerable to his malevolence. It had made me like my mother. But, what I said about God—that’s just my opinion. I know that a lot of you think he’s really quite sweet.
Posted by Snowbrush 33 comments: Links to this post