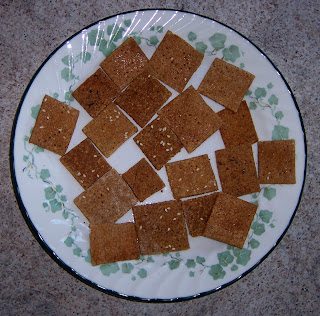 Some of you asked for this recipe a couple of posts back. You can name it anything you want to. I just call it "regular crackers" to distinguish it from the other crackers I bake. Maybe I should call it Manly-Man's Battle Bars.

1/2 cup warm honey (or however much you want)
2+ cups warm water (water and honey mix into the dough better when warm). Add slowly, and vary the amount as needed to get a dough that is moist but not sticky.

This is a big recipe (I would guess 200-250 crackers that are 2/3 the size of a saltine) so feel free to halve it. Alternate adding the oil and water because the dough will be less sticky than if you put the oil in ahead of the water, but not slippery and dripping the way it would be if you put it in after the water. This recipe takes about 2 1/2 hours from start to finish unless you have a oven that will hold more than two cookies sheets.

My Kitchen Aide Mixer isn't big enough for so much dough, so I mix two separate recipes, one at a time, and then join them together with my hands before I ever start rolling them out. Flour the dough no more than necessary as you roll it, and aim for a thickness that is maybe a little thicker than a saltine. I would suggest that you cut the rolled dough into squares so you won't have to re-roll the large amount of leftover dough that results from rounds. You can roll flax, caraway, or sesame seeds into the top of the dough. If you do this a little before your final rolling, they will stick better than if you forget and add them at the last minute as I often do.

Hold a fork in each hand and poke the rolled dough a few times to prevent air pockets from forming in the oven. Now, you are ready to cut the rolled dough into cracker size pieces. I would suggest that you use a large cutting board for this along with a large sharp knife because a large knife will cut faster and straighter than a small one. Bake at 290° to 325°, depending on how fast you want to roll out crackers to replace the ones that are coming out of the oven. I prefer cookie sheets that have an air pocket in the middle because crackers are prone to burn on bottom, and the air pocket helps.

Flip the crackers once or twice during baking. Move the top cookie sheet to the bottom and the bottom cookie sheet to the top (turning each around) after you flip them. This will help prevent burning. I check on them every three to five minutes, and more often than that as they get closer to being done because the time between being done and being burned isn't much. You will also find that the crackers toward the edges get done ahead of the crackers toward the middle. Just don’t leave any of them in until they're more than slightly brown because it will give them a different taste that is somewhere between done and burned. This isn't necessarily bad, but you probably wouldn't want them all that way. If you don't know whether to take one out or not, err on the side of caution until you develop of feel for what to do. Spread them on a countertop to cool and harden. I freeze them in quart bags but we used to take them traveling, and they would still be good after two months without refrigeration.

These crackers aren't anything like the ones you can buy in a store, even a health food store. They're more on the order of American Civil War hardtack but not as thick. If you want to go decadent right out of the gate, you can substitute Parmesan or some other cheese for about half the flour, and throw in however much cayenne you think you would like (if you're a woos, about a half tsp). This makes for a slightly more difficult dough but a damn tasty cracker. Substituting corn meal for about a fourth of the flour is another option, and it makes for a delightful dough, but the cracker itself is a little hard to bite into even when it's thin. Yet another option is to make a flour out of walnuts or pecans, and substitute some of that for some of the real flour. Crackers invite such experimentation.

Making crackers relaxes me, and I especially enjoy it at night in the dead of winter when rain is falling and Peggy is away. I will put on a Western movie, smoke some pot, and bake until I'm baked out. Sometimes, I bake biscuits and cornbread on the same night that I bake crackers. Between the movie and the marijuana, you might think I must burn a lot of dough, but I guess I've baked for so many years that it's not enough of a challenge that I need to be at the top of my game. I just have to remember that I have crackers in the oven; after that, the rest follows. Try using a timer if you want to, but you will have to reset it a lot.
Posted by Snowbrush 9 comments: