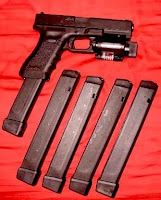 If I was outraged when Congresswoman Giffords was shot, surely it behooves me to ask myself how I would have felt had G. W. Bush been shot when he was president. What Americans are supposed to believe is that if they dislike one elected official, they should work to elect another. But what if you think the official you dislike is single-handedly taking your country down the toilet? The fact is that I would have liked it A LOT had Bush been killed. The only thing I would have liked better had been if his entire cabinet died with him because it wasn’t Bush the man whom I cared about but the policies of the Bush administration.

But what of those today whom—benighted though they appear to me—see Obama as being as evil as I saw Bush? I could say that nearly all of the harm Obama is said to be doing will almost certainly be overturned after the next election, whereas George Bush left generations in debt, started two unnecessary wars, and caused the deaths of hundreds of thousands. If I explained this to the Obama haters, would they be likely to agree that the politicians I want to see dead are worse than the politicians they want to see dead? But of course, when hell freezes over.

It’s almost a moot argument anyway because the odds of killing a president—much less a president and his cabinet—have gotten harder over the years (JFK was riding right out in the open through the streets of a city that largely despised him). Senators and Congressmen are another matter though. Any of us could kill one just by checking our local newspaper to see when she’s scheduled to appear at a nearby event, and showing up to shoot her. Imagine how scary this must make it for elected officials who support abortion, gun control, healthcare reform, or any other issue that makes the right lather.

But do right-leaning politicians not have just as much to fear from the left? Probably not. That’s an politically unpopular opinion, of course, but political popularity isn’t related to truth but to the desire to win elections. As nasty as the left can be, I don’t recall them putting crosshairs on opponents’ districts, threatening to exercise their “second amendment option” (for non-Americans, that’s the amendment that has to do with gun ownership), or talking about taking their opponents “out.” Neither do they have rabid radio talk show hosts egging them on 24 hours a day.

Be that as it may, if one side of the governmental aisle feels itself in danger of being assassinated, then it’s reasonable for the other side to get uneasy too, so the most outrageous rhetoric will no doubt be toned down, at least by the politicians themselves and at least until the next election, because if there’s one thing we can trust our elected officials to do, it’s to take care of themselves first, and that’s true of the right and the left. After all, it’s not their lifelong government subsidized healthcare they argue over; it’s ours.

For those who care, the Glock in the photo is similar the one used in Tucson but with a laser scope. I chose this photo because it also shows an extended clip similar to the one used by Loughner. Four extra clips are also pictured.