Circles. If only mine overlapped, or at least touched. 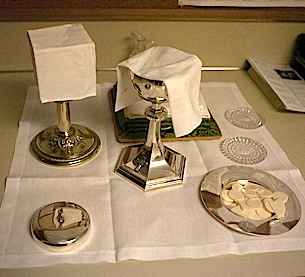 St. Mary’s has what it calls a Circle Service on Saturday evenings, and I went to one last month out of curiosity. Twenty people were present, 80% of them women, and 80% of them between 55-70. The seats were arranged in a circle, in the middle of which was an altar with candles and communion elements but no cross. The service was led by a lay person, everyone hugged everyone during the Passing of the Peace, and communion was passed from person to person instead of being served by a priest at a railing. I didn’t say the words, and I didn’t sing the hymns, but I did think about how I might do what many Episcopalians do, which is to impose a private meaning onto public expressions of faith. It was a daunting task.

Communion was proclaimed as “open to all,” leaving me free to interpret it in the same way that I interpreted the hugs, that is an act of human intimacy rather than the symbolic consumption of a corpse. When I got home and told Peggy (herself a nonbeliever) that I had taken communion, she called me a phony and said that if she had been one of the communicants and had known that I was an atheist, she would have been outraged. Since about a third of the communicants did know, I wondered how they felt.

I’ve been to two other Circle Services because I enjoy the sense of community and because liturgy fills me in a way that nothing else can. It also enables me to set aside my disagreements with Christians and to meet with them at a heart level. All I require is that they want to meet with me, not as a spectator, but an equal.

Every Saturday, I ask myself whether I want to go that day, and my answer has been about 50/50, mostly because I worry about causing offense. Last week, I went. Judy—who was born in Mississippi 20 miles from my own hometown—was to lead the service, and I looked forward to the heart that I knew she would bring to it, that and her beautiful Southern accent. I first sat on the other side of the circle from her, but when I became aware that I wanted to be near her, I took the empty chair to her left. Before she started the service, Loren (my Yoga instructor) came over and suggested that, if the words of the service didn’t work for me, I use words that did. Priest X* (who also knows of my atheism) arrived, and s/he sat to my left so that I was between Priest X and Judy.

When the time arrived for Priest X to go to the altar and consecrate the communion, Judy whispered that I shouldn’t feel pressured to take it if I didn’t want to. I said that, no, I wanted to do so. She seemed surprised but also pleased. After starting the communion around the circle, Priest X returned to the seat beside me without having taken it, which meant that s/he would be the last person to receive it, and that I would be the one to serve it. I nearly laughed aloud at the thought of an atheist giving communion to a priest.

Serving the bread involved tearing off a piece of it and saying certain words as I put the piece into Priest X’s hands. That being done, I wiped the rim of the chalice with the piece of cloth that accompanied it, and served the wine in the same manner. As all this transpired, Priest X looked me in the eye with extraordinary alertness. I took this to mean that s/he was completely in the moment, although in what way, I couldn’t tell. Only two surmises came to me. One was that s/he was simply struck by the novelty of the situation, and the other was that s/he was looking for signs of disrespect. Aside from these wonderings, I was very much in the moment too.

Someone later wrote to me that the first priest to consecrate the communion (this was over ten years ago) had wanted to specify that it was for those who were, “seeking a deeper relationship with Christ,” but that the Circle Service community had voted him down. I responded (too bluntly) that any largesse that can be granted by vote can be taken away by vote. I wrote this way because I am the leper, the tax collector, the adulteress, and the woman at the well whom the religious people of Jesus’ day condemned and whom most religious people today still condemn. If Christians believe that the invitation to Holy Eucharist comes from Christ, then I would say to them, who are you to vote anyone in or out? I have no reason to think that they saw things from this perspective, whereas I feel sure that it was hard for them to override the wishes of a priest who had been their leader for decades, and that they were willing to do so precisely because they wanted to reach out to those whom he would have excluded. Priest Y—this church has several priests and deacons—wrote to me: “…no one would be upset that an atheist joined the circle. That's pretty much WHY that service exists, for those for whom the traditional ‘father, son, holy spirit’ language just doesn’t work.”

After I wrote everything above this paragraph, I went to the Circle Service that occurred the day after the mass murder in Connecticut. I had been very upset by that shooting, and I debated whether Circle Service was a good idea for me since Christian explanations of such events strike me as worse than useless. While I knew what might be said, my growing closeness to the people left me to hope they would do something more meaningful, so I went. It was a mistake. For one thing, I get tense in crowds, and instead of the usual 20 in attendance, there must have been thirty. For another, the laywoman who gave the homily started with, “People always want to know why these things happen, but, of course, there is no answer, not really.” Then she gave a sad little smile which I took to imply that, rational thought being useless, she was ready to offer some thoughts on inner peace. I remembered an old series of Miller Lite commercials that would pose a question (what do women want? is there life on Mars?), and immediately conclude, “Why ask why? Drink Miller Lite,” and I envisioned those thoughts as Jesus Lite.

I looked around at the other people in the circle, and, rightly or wrongly, I took their benign expressions to mean that they liked what they were hearing, and I felt very alone. Then it struck me that when I started going to the Bible study at St. Mary’s, my guess was that people would be offended by my atheism, yet everyone has been supportive. I’m the one who’s offended—at least I was on Saturday—because that brief sermon seemed to verify something I had worried about, namely, is church primarily an escape into fantasy. The people at St. Mary’s are sweet, the songs are sweet, the hugs are sweet, the talk of inner peace is sweet, but the people don’t appear to ask the same kinds of questions that I considered inescapable after age eleven.

You might very well point out that I’m reading way too much into one sermon, and you might very well ask what, if anything, would have pleased me—a Power Point presentation entitled “Theodicy Through the Centuries”? Angry Christians shaking their fists at a God whom many consider willing to help people find parking places and win football games, yet allows children to be murdered? What did I want from them? I wanted something that seemed emotionally real. If they had said, “Yes, sometimes religion seems like bullshit even to us, and, no, we can’t defend it, but, whether you think so or not, we believe it makes us more loving than we would be without it,” I would have felt solid earth beneath my feet. What else would have satisfied me? Tears. Maybe silence. Maybe saying to God, “You know, trusting you isn’t easy when you refuse to do that any of us would hope we would have done, which was to stand between a mass murderer and twenty children even if it meant that we would die without saving a one of them. But maybe none of this would have been real for them. Maybe they really are okay with not asking the kinds of questions that atheists ask. Yet, to immediately turn the focus of Oregon Episcopalians toward their feelings and how they might mitigate their pain over a shooting in Connecticut! Maybe I misunderstood her intent. Maybe prejudice got in the way.

Priest Y also wrote to me: “Atheism doesn’t bother me, because I consider atheism, when one arrives at it intellectually and is willing to continue to ask questions and interact with other people as a seeking person on this great journey, to be a valid form of spirituality.” Atheists tense-up when the word spiritual is applied to them because they expect the next sentence to be: “You’re too sensitive [or intelligent, or perceptive, or caring, or fine a person] to be a real atheist.” I re-read Priest Y’s email to find such an implication, but when no hint of patronage or condescension appeared, I was forced to conclude that, wonder of wonders, this leader in a worldview (Christianity) that has oppressed and reviled people like me for 2000 years, validates my path. But can I validate his/her path. My answer is that I am trying to be open to the possibility that Christianity at least can lead to wisdom and kindness because I’m tired of the hatred that results from assuming—as atheists often do—that the only salient effect of the Christian religion on its followers is delusion, ignorance, oppression, and buffoonery. If I can’t find some good in Christianity in a church that is willing to include me in its communion, as an atheist, where can I find it? The problem is that, just by looking, I feel like a traitor to those atheists who spend their lives fighting to keep the forces of religious oppression at bay. I’m like a person who has become lost in the Arctic and finds himself astride ice floes that are drifting apart, unable to let go of either.

* I feel obligated to keep the identity of most priests private, especially when the opinions they share with me contradict official church doctrine.
Posted by Snowbrush 27 comments: