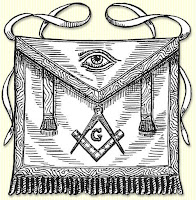 I decided at the last minute tonight to attend my Masonic Lodge. My ambivalence about Masonry is such that the last minute is usually when I decide to attend. As I biked, I rejoiced in the thought that the officers for the coming year had been installed over the weekend, so at least I wouldn’t get corralled into being one of them. Upon arrival, I learned that the incoming master had arrived so late to the installation that it was called off and was to be held tonight instead.

I furthermore learned that he wanted me to serve as junior deacon. The primary duties are to say a few memorized lines and to bar the entry of anyone who isn’t qualified. I said I would accept the position only if I wasn’t required to wear a tux. The master said he wouldn’t insist on it, but the senior deacon lost no time in sorting through dead men’s clothing in search of one that would fit me.

I am happy for my new position. It will be my first Masonic office since I served as secretary in 1995.
Posted by Snowbrush No comments: