An experiment in not editing—much anyway 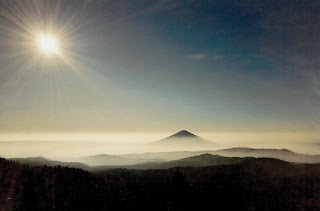 I’ve been thinking about posting more and editing less because it’s making me crazy that I can’t stop editing. Even after I post something, I continue editing for days. So, here goes.

It’s a good day to live in Eugene (the photo is one that I took of some area scenery). The six months of drizzle are at an end, and the drought hasn’t arrived. It’s our second 80-degree day (27 C), 80 being 15 degrees above my ideal, but still pleasant enough.

I did yard work yesterday and suffered a lot for it last night. In fact, I’m such a wreck today that I’m avoiding unnecessary chores. I had intended to at least march in a pro-marijuana parade, but my knees were hurting too bad. I did bike to the library and got some books about war (I just finished—and can recommend—American Sniper, The Autobiography of the Most Lethal Sniper in U.S. Military History). I also bought some eucalyptus incense—which I’m now enjoying—and biked around the downtown area looking at the freaks. I like freaks—if they’re pleasant freaks. I also enjoy homeless men. Years ago, I considered them disgusting, so one day I passed a panhandler without speaking to him although he said something to me. He got up and followed me, demanding in a loud voice that I at least show him the respect of acknowledging his existence. I walked on in silence. I now shed tears when I remember that man. I could have done good, and I chose evil.

My right shoulder is hurting me a lot today, but I do my damnedest to avoid drugs in the daytime with the exception of marijuana, and I’m already so strung-out from the drugs that I took last night that I don’t dare use that. I literally feel like I’m losing my mind, and marijuana could make it worse. I’m also so tired that I'm sick, and marijuana could make that worse too. Then again, it could make me hyper. It's not a predictable drug, at least in my case.

Kurt and Jackie are coming for supper. Their cat was killed the day before yesterday, and although we rarely see them more than a few times a year, I thought it good to invite them to supper for the second week in a row. They accepted with an enthusiasm that made me sad for them.

I have two other recommendations for you. The first is an interview entitled A Portrait of Maurice Sendak. It's the heaviest thing I've ever seen on film, yet it's only 39 minutes long. He died a few days after I watched it, and I've seen it a few more times since then. My last recommendation is Memoirs of an Addicted Brain: a Neuroscientist Examines His Former Life on Drugs. The author reminded me a friend from 30 years ago named Larry. One day Larry and were smoking pot with another man when the other man handed Larry a handful of pills and asked if Larry knew what any of them were. Larry had no idea, but he swallowed them down without even asking. After that, I thought of him as a starving dog.


So, I took a hit, and I'm happy to report that I feel a little better. The pain is still with me, but it doesn't hurt like it did.
Posted by Snowbrush 12 comments: