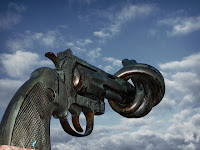 I had never written a joke in my life, but when I couldn’t sleep last night, I wrote these. I’m not saying they’re good; I’m just saying I wrote them.

A blonde who wanted to be a mass murderer shot over a hundred people with paintballs before somebody pointed out that she had the wrong kind of gun. She then shot herself in the head, but all it did was to turn her hair green.

Another mass murderer wannabe stormed into a Catholic church wearing a George W. Bush mask, and proceeded to shoot-up the communion wafers. The judge sentenced him to 30 days for the shooting and 30 years for the mask.

A mass murdering man and his mass murdering dog walked into a bar. The man told the bartender that the dog could talk, and the bartender said drinks would be on-the-house if it were true. The man said, “Speak, dog,” and the dog said “Woof,” but the bartender wouldn’t give them the drinks because he said it was dog talk rather than people talk. The dog and the man killed everyone in the bar, and then they had their drinks-on-the-house.

A traveling salesman mass murderer named Massey had car trouble one night and knocked on the door of a farmer who had a beautiful daughter named Lassie. Lassie and Massey fell in love, but when people laughed at them because their names rhymed, Massey killed them all, and then he and Lassie lived happily ever after, but they never actually got married, so some people say they lived in sin.

This morning, I asked Peggy what she thought of my jokes. “Not much,” she said. “Should I put them on my blog?” “NO!” she answered. Then I got to wondering how people would react if I did, and I decided to find out.

During the first few days after the murders, I was really upset, and I’m still really upset, but now that the American press has done what it does best, which is to substitute tears for news in order to boost ratings; and now that politicians have done what they do best, which is to translate suffering into political currency, I am less in touch with grief than I am with anger and cynicism, if not frothing hatred. The major news before last Friday was all about continuing unrest in the Middle East and America’s upcoming fiscal cliff. This week, the major news consists of tearful interviews of people who knew—or knew someone who knew—last week’s murder victims, along with the expert opinions of media shrinks who had the shooter and his family psychoanalyzed before the victims’ blood had coagulated.

As to the politcians, Obama (our Nobel Prize winning hit-man-in-chief), went four years without doing anything to reduce gun violence, and he just got through running an entire presidential campaign without mentioning it, but having discovered last week that guns are dangerous, he gave Joe Biden (his vice-president) until next month to come up with proposed gun control laws along with suggestions about how to curb the “culture of violence” in America (he’s talking music, movies and video games here, not the actual wars, assassinations, imprisonments, and bombings that he himself supports). When he was asked why it wasn’t until last week that he started supporting about gun laws, he said he had been too busy trying to save the economy. What I would like to know is when he finished with that?

Even numerous Republicans have reversed their belief that patriotic Americans should be able to own any weapon short of a ballistic missile (a few months ago, one such Republican ran a campaign ad in which he was shown firing bullets into environmental regulations). What do these politicians know now that they didn’t know when they got out of bed last Friday? That 8,500 Americans are shot dead on their own soil each year? No, they knew that. The only additional information they have is that the political breeze has become a major storm, and that their careers are dependent upon blowing with it.

I copied the following from the Bushmaster site (the gun used in Connecticut was a Bushmaster) because it uses the common American view that real men love guns as a marketing tool. The text refers to a promotion in which men who bought the kind of gun used in the Connecticut shooting automatically received permanent "man cards."

Proof of Your Manhood – The Man Card ... Do you have what it takes? 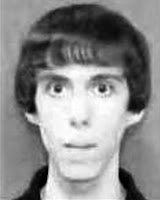 Windham, ME – Inspired by the overwhelming response to Bushmaster’s “Consider Your Man Card Reissued” sweepstakes, Bushmaster Firearms announces the latest part in the series; the Man Card online promotion.

To become a card-carrying man, visitors of bushmaster.com will have to prove they’re a man by answering a series of manhood questions. Upon successful completion, they will be issued a temporary Man Card to proudly display to friends and family. The Man Card is valid for one year.

Visitors can also call into question or even revoke the Man Card of friends they feel have betrayed their manhood. The man in question will then have to defend himself, and their Man Card, by answering a series of questions geared towards proving indeed, they are worthy of retaining their card.

The company is now up for sale, and many of its internal links (including the one for Man Cards) no longer work. Maybe the idea just isn’t all that funny anymore. When I last posted, I wrote of the hell that I saw in the eyes of the woman whose photograph I included. Now, I’ve been sitting here looking into the hell that I see in the shooter’s eyes, and some of my rage toward him has been replaced by pity. There is a deep sickness eating away at the heart of my country, and I wish I could believe that it can be healed, but when the very man who has called for an end to America’s culture of violence kills causes people to die violently everyday, where is there reason to hope?
Posted by Snowbrush 13 comments: