The uncertainty of mathematics 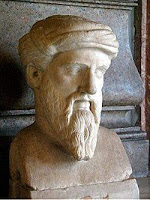 I was the doorman for a funeral at lodge this week. When various people began showing up with flowers, I assumed they were for the funeral. I let them in, and they headed off downstairs. This puzzled me because the funeral was upstairs. I soon learned that the Eugene Orchid Society was meeting in the basement. I (jokingly) began asking people if the bereaved might not borrow their flowers for a while.

I only slept two hours last night because of sharp pains in my leg. I spent the rest of the night reading from two of my books about mathematicians, and am wondering if their authors presented the most extreme cases or if great mathematicians really do tend to be superstitious and prone to mental collapse and suicide. They also appear to have an inordinate fear of aging due to the fact that mathematicians hit their peak early. As in the case of the orchid fanciers at the funeral, I am seeing the opposite of what I expected, having assumed that people whose lives were characterized by clarity in one area would be more likely to possess clarity in other areas.

Another troubling outcome of my reading is that mathematics is not the bastion of certainty that I thought it to be. If I were asked to name a great mathematician, the first name that would come to mind would be Bertrand Russell, the co-author of Principia Mathematica, a three-volume work that, for decades, was believed to have put mathematical thought on a firm foundation. Yet, he later wrote:

“I wanted certainty in the kind of way in which people want religious faith….. But I was continually reminded of the fable about the elephant and the tortoise. Having constructed an elephant on which the material could rest, I found the elephant tottering, and proceeded to construct a tortoise to keep the elephant from falling. But the tortoise was no more secure than the elephant, and after some twenty years of very arduous toil, I came to the conclusion that there was nothing more that I could do in the way of making mathematical knowledge indubitable.”

My limited exposure to math didn’t prepare me for this. I didn’t even know about irrational numbers. I was told that pi was an approximation that could not be carried out to the last decimal point, although I never asked why, and had no idea how many such numbers there are. For example, if a square measures one foot on each side, the length of a line drawn diagonally across that square will equal the square root of two. Only there is no square root of two, at least not one that can be brought to a final decimal point. When a student of Pythagoras discovered this, Pythagoras had the man killed. He apparently needed truth to be more than it was.
Posted by Snowbrush No comments: