The Peggy Series: Everything I know about going to the doctor, I learned from my dog 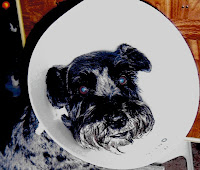 Peggy is a nurse; Peggy hates doctors. If I hadn’t coerced her into going to one after months of pain and immobility, she still wouldn’t know that she has De Quervain’s tenosynovitis.

Dogs hate doctors too. Peggy and the world’s dog population are alike in this. I’ve gotten many emails about all the things that people learn from their dogs. If I were a space alien and read these emails, I would conclude that dogs are smarter and more virtuous than people. This would be because none of the emails focus on their negative behaviors. If I were to write such an email, I would make it about doctor visits, and here is what I would say. It applies to Peggy almost as much as it does to dogs.

Only go to the doctor under extreme coercion.

When the car pulls into the doctor’s parking lot, whine a whole, whole lot. Also, throw yourself violently against the car’s doors, windows, and even the ceiling. If you’re too sick to reach the ceiling, just throw yourself as high as possible. Give the phrase “bouncing off the walls” a whole new meaning.

Force the family member by whom you are being betrayed to pry you from the car.

Whine, tremble, and hyperventilate as you are being dragged into the waiting room. Make sure that everyone within a ten-block radius knows that the Spanish Inquisition has you in its clutches.

Each time a new patient enters the waiting room, make a break for the door. Do the same when a patient leaves. Also do it when no one is around.

If you can’t escape from the building, hide under a chair and hope your tormenters won’t find you.

When called to the examination room, increase all previous resistance measures by a factor of a ten.

Show the doctor your teeth. Do this even if he is trying to examine your ass.

If you’re too frightened to show the doctor your teeth, focus on becoming so small that he can no longer see you.

If he examines you ass, turn your head around and look at him as if to say, “I knew you were a perverted bastard, but I never dreamed you were THIS perverted.”

See how high you can make your fur stand-up.

Growl like five wounded wildebeests and twelve angry grizzly bears who are being tortured in front of the world’s loudest sound system while nuclear bombs explode in the background. Don’t worry about staying in key; you’re not auditioning for The Lettermen.

Continually attempt to jump from the examining table. Do this even if you have three broken legs, have been poisoned, and your throat is cut.

Throw yourself from a window if possible. Don’t worry about whether it is open or how far you will fall.

If the doctor attempts to bribe you with food, take it if you wish, but then return to all out resistance.

When—after ten minutes or ten days—you hear your betrayer say, “It’s time to go home,” run from the building before he changes his mind.

Wag your tail and snuggle during the drive home so that he will know you forgive him. With luck, this will so instill him with guilt that he will never take you to the doctor again.


Footnote: You have just completed the first post in “The Peggy Series.” The following is a partial list of future chapters.

What is wrong with Peggy—an overview.
Life with Peggy—one man’s path to sainthood.
Peggy’s problems—what other people have to say.
How many shoes does a female biped really need?
Peggy’s cookie addiction—is there reason to hope?
Why does Peggy take so long getting ready to go somewhere?
What is this hang-up Peggy has about wanting the toilet flushed?
Why do the best men always seem to end up with the worst women?
Peggy’s spider phobia—do stupid phobias in women prove male superiority?
Why can’t Peggy find her way around a town in which she has lived since 1986?
Why does Peggy try to make me look bad by remaining calm when we’re having a fight?
Why should I have to help out around the house just because Peggy is the only one with a job?
Is Peggy’s hang-up about me slobbering over other women due to selfishness, insecurity, or both?
Why must Peggy clutter the house with knickknacks that have to be dusted and could fall on people’s heads during an earthquake?
When driving, is it really necessary that Peggy wait until the last possible second to apply the brakes, only to laugh at me for pushing my feet through the floorboard?