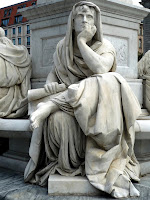 I
I would say that I have a good marriage, yet Peggy is a serious disappointment to me in some ways. For example, she’s a procrastinator who often expects me to help her with one project or another at the last minute when she’s under pressure, and I have something else I want to do. I don’t do pressure, and I become testy when someone rushes me, so it’s a bad situation that I blame entirely on her because she’s the one who’s doing the imposing. However, I finally had to give up trying to change her. Not that I don’t bitch and moan from time to time, but I would be an idiot if I expected anything but broken promises to come of it. The sad truth is that EVERYONE is like Peggy. Instead of expecting another person to be all but perfect and to love you forever, put your emphasis on deciding whether you even find them tolerable.
When I was in my teens and twenties, I would ponder all these heavy religious and philosophical questions, but my half-sister, Anne (my elder by eleven years), was the only person I ever knew who wanted to discuss them. I assumed from this that everyone else must already know the answers but for some reason wouldn’t share them with me. I made this assumption because I couldn’t imagine that questions which were so compelling to me could have escaped their notice altogether. When I finally—after many years—concluded that they had, I started to think less of other people and more of myself. I pictured everyone else as being like dogs or cats, nice enough in their way but sadly lacking nonetheless.
III
I was embarrassed to be a Mississippian long before I moved to liberal Eugene, where Mississippi and every white person in it is considered a joke. I would get mad when I heard people trashing Mississippi, not necessarily because I disagreed, but because they couldn’t have named the major towns, or pointed to The Delta on a map, or identified kudzu and fireants. They were simply relaying to me, a lifelong Mississippian, all the bad stuff they had heard. For awhile, I joined them; for awhile, I kept my mouth shut; now, I demand to know their sources because theirs is usually a case of prejudice based upon hearsay. It doesn’t even matter to me that a person is right; if his reasons for his beliefs are unfounded, he’s still a bigot.
Foolishness that is at least understandable in the young becomes inexcusable with age. I'm very aware that I'm a "senior" now and, except for the physical pain and limitations, I rather like it because at no time in my life have I experienced more of wisdom or contentment.
I just finished Hell in the Pacific by Jim McEnery. It wasn't the best war book I've ever read (that would be With the Old Breed at Peleliu and Okinawa by E.B. Sledge), but I'm glad I read it. The following passage will stay with me more than most: “I’ve never lost sleep over the enemy solders I shot or bayoneted or blew to bits with grenades—not even the wounded ones I put out of their misery…. I did it the same way you’d chop off the head of a poisonous snake that was about to bite someone.” I would call that a pretty good example of the dehumanization of war. Of course, the Japanese military went out of its way to earn such hatred (just as we did with our “Shock and Awe” bombing of Baghdad), but still… About three years ago, I heard an old man say with tears in his eyes that he had recently hugged a Japanese woman, her being the first Japanese he had touched but didn’t kill.
VI
Someone wrote that I put unnecessary limits on my openness to experience by labeling myself an atheist. This ignores the fact that I used to be a believer, and that I don’t consider any of the experiences of God that I had back then to have been worthwhile. I went from being scared shitless of God when I was young, to hating him when I was a teenager, to not believing in him when I was in my twenties. That said, I should think that a person who is committed to believing in a particular version of god might be at greater risk than an atheist of limiting his experience of the divine. For example, what if God should come along but not look or act the way a person expects him to look or act; might not such a person fail to recognize God? Because an atheist wouldn’t be so committed, he might be better able to experience God than a lot of theists. After all, few atheists categorically say that God's existence is impossible; they simply say that they can't find a reason to believe in him.

VII
Old times seem to look better with age when the sharp edges have eroded somewhat, and everything has been interpreted and reinterpreted so many times that reality is forgotten.