Careers, affairs, and other marital considerations 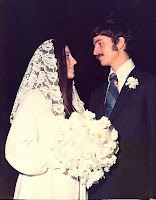 Peggy holds the most respected job in America, and I the most despised. Registered nurses outrank doctors and professors. Househusbands fall below politicians and car salesmen. Indeed, most people don’t believe househusbands exist; they think we are simply men who mooch off our wives. Such was how my mother saw it; she called Peggy my “meal ticket.”

I got the job in 1978 after I built our house in the Mississippi woods. The plan was for Peggy to work and for me to do everything else, which at the time included gardening, preserving foods, adding finishing touches to the house, and working part-time as a writer, carpenter, candle-maker, and housepainter. After we moved to Oregon in 1986, I continued being the houseperson, but I also continued taking outside work, although Peggy never liked it because she had to help with the chores. My last job was as an on-call handyman for an office suite; when my boss left in 2001, I did too.

A major part of my househusband tenure has been remodeling the houses we’ve owned, and this points to one of the awkward aspects of my job. Namely, it doesn’t have an adequate label. Househusband implies cooking, cleaning, and doing laundry; but not remodeling, yard work, investment management, and car care. When I am asked what I do, I either have to go into a long description or offer an inadequate title. Now that I’m sixty, I just tell people I’m retired. Not that they ask much anymore because they assume I’m retired based upon how frigging old I look.

Women who understand how much I do for Peggy often ask her if they can borrow me for awhile—or they tell me that they would like to take me home with them. Peggy doesn’t know how to scan a credit card because I do the shopping. She doesn’t know how to look up a library book because I get them for her. She has no idea how to go anywhere because I either take her, or I go with her and give her directions. I set my mental clock each night so she won’t have to wake her up to an alarm. I make her bed; I cook her breakfast; and when she comes home, I have her supper ready. If she needs an appointment, I arrange it. If she needs business transacted, I do it.

I went to the dentist with her on Wednesday and held her hand while she was having her teeth cleaned. On Thursday, I sat by her side during her bone density scan and learned as much I could about osteoporosis. Later that day, I went to the doctor with her because she had a blocked salivary gland—I did most of the talking. Prior to these visits, I filled out her medical forms and printed an updated copy of her medications. Afterwards, I took her home, and then I picked-up her prescription.

I take care of Peggy like she is a cross between a child and the queen of England. In return, I don’t have to deal with the hassles of pleasing an employer, and I can schedule my time pretty much as I wish. Other than societal disrespect (which really isn’t an issue anymore) my job only has four downsides. One is that I am dependent upon Peggy for my income and my health insurance, so if she should die or lose her job, times would be hard. The second is that I do all of my work alone and miss the feeling of being part of a team. The third is that my work hours aren’t clearly defined, so I always worry that I’m not doing enough. The fourth is that Peggy is my de facto employer, and she can be a hard woman to please.

For example, she recently had a Corian top made for a table in her bedroom, and I mounted it from below with four bolts and nuts. Peggy got down on the floor and, by moving her head from side to side, noted that the sides of the nuts were not lined up with the walls of the room. Most people would consider me a careful craftsman, but I never feel that I make the grade with her. It’s not that she gets upset or gives me a hard time; it’s just that she can’t let go of something until it meets her standards. Her hobby is collecting antique clothing buttons and arranging them on perfectly laid out cards, for god’s sakes. Extreme detail is her idea of relaxation; it is my idea of torture.

The more in touch I become with my own mortality, the more I try to teach Peggy things that she would need to know if she were alone, things about our finances or how to do stuff on the computer, for example. But Peggy is incredibly resistant to such information. Even though I’ve repeatedly shown her how to get to the dentist, her best guess this week would have landed her two miles away. It’s as if she thinks she can keep me alive by making me indispensable.

Despite what might sound like a lot of hovering on my part, I never even try to say no to anything Peggy wants to do because it’s not my place to run her life; it’s my place to assist her in running her own life. She gives me the same freedom. If I decided to spend the next month camping alone in Montana, Peggy would support me. In past years, I’ve been gone twice that long and traveled thrice that far, but I’ve since lost all desire to leave home. Everything I value is right here.

Does this mean you regard Peggy as your soul mate?

I would say both no and yes. No, in that it’s a flawed concept. How many people did any of us get to know well enough to consider marrying before we chose the person we did marry? I had precisely three girlfriends after age 18 and before I married Peggy at 22. All three wanted to marry me, but Peggy was the only one I wanted to marry. How many women did I fail to check out before I married her? Millions. And what are the odds that I might have gotten along better with at least one of them? Probably thousands.

The way I see it, the goal isn’t to find the best woman in the whole world (whatever that means), but to find a damn good woman and love her as best you can. Sure, I’ve had girlfriends since I’ve been married (which means that my best hasn’t always been that good), and I’ve sometimes wondered if I wouldn’t be happier with one of them, but I always came back to the thought that Peggy is a woman of kindness, loyalty, intelligence, and integrity, whom I know well and with whom I am highly compatible in important ways. Ergo, how much sense would it make for me to run off with someone whom—in all honesty—the main things I know about are that she’s pleasing to look at, fun to talk to, and hot in bed? A new girlfriend always looks better than an old wife precisely because she is new; I know Peggy too well to build endless fantasies around her.

I could find half a dozen “soul mates” this afternoon alone based upon the wonders I saw (or imagined) when I gazed into their eyes. Lots of women look perfect, but it’s like the seasoned trail boss (Eric Fleming) used to say to his romantic young ramrod (Clint Eastwood) on the old TV show Rawhide!: “Rowdy, just because a woman looks like an angel; it don’t mean she is one.” I’ve found it difficult to wrap my mind around this concept, and the only reason I’m getting any closer is that my testosterone levels are on the decline.

Now for the yes. Inasmuch as the concept of a soul mate is valid, she—or he—is both born and made. I’ve been with Peggy for almost two thirds of my sixty years. Even if I should meet a woman with whom I felt such oneness that she seemed like myself in another body, she still wouldn’t know me the way Peggy knows me, and I still couldn’t give her my unreserved trust because I wouldn’t know her. It’s one thing to know what I’ve got, and quite another to know what I would hope to gain, and in this, as in all things, I live by the adage that, if something looks too good to be true, it probably is.

You might say that I’m not being very romantic, but I’m not writing about romance; I’m writing about what I’ve found to work in life. If I lived by romance alone, I’d probably be on my fifth marriage by now. Romance is like dessert wine. It’s great to enjoy but bad to get drunk on.

By the way, the picture was made in 1971.
Posted by Snowbrush 58 comments: