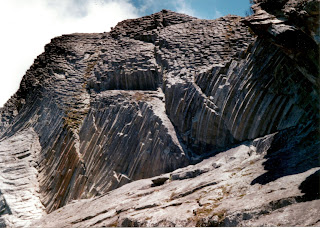 The Cascade Ranges (sometimes referred to as Eastern and Western, and sometimes as Old and New) have thousands of rock formations that consist of magma which hardened underground and was exposed when the surrounding rock eroded away. Like nearly all of them, Symbol Rock (pictured) sits quietly to itself, for that which would be the centerpiece of a park in most places is commonplace in Oregon. Indeed, Symbol Rock and dozens—if not scores—of similar formations can be found within fifty miles of here, although few people know of them because few people venture into the wilderness.

As was true elsewhere in America, most of Oregon’s indigenous peoples died of European diseases without having ever seen a European, the diseases being introduced by a relatively few pre-settlement explorers, traders, and missionaries. This makes it impossible to know what the original Americans thought of most intrusions, but they generally regarded impressive natural features as possessing healing powers, and they created anthropomorphic myths to explain the origins of such features. I believe that natural features (along with art, music, friendship, literature, placeboes, and various other things) can indeed heal people, but I have no thought that tales of warring spirits or trickster coyotes are relevant to explaining their existence. For this, we must turn to science.

Many western Oregonians would disagree because the region is attractive to those who take a mystical view. Many of them view both science and mythology as nothing more than culturally-based interpretations of nature, with science being inferior to mythology in that its mechanistic outlook, its human centeredness, and its faith in reason and evidence, deny the possibility of a spirit realm and therefore of ordained purpose. My animus toward such people comes from the fact that they take obvious advantage of the fruits of the science that they profess to hate while the fruits of the spirituality that they profess to love remain anything but obvious. Indeed, I think their claim to heightened respect, insight, sensitivity, compassion, and morality, are simply the products of their narcissistic imaginations. Our one area of agreement is that we both view the dominant forms of Western religion as wicked and depraved.

At the one end, in our Western world, there lie the beliefs and practices of those whom I have referred to, people who embrace such titles as pagan, spiritual, and mystical; at the other are those like myself who uphold reason and evidence as humanity’s only shot at objective truth; and between the two, the dominant forms of Judaism, Islam, and Christianity; authoritarian religions all that proclaim the earth accursed and treat it accordingly even as they pursue worldly wealth and power. As much as they hate one another, pagan/spiritual/mystical people and mainstream religious people are alike in that they share a contempt for reason and evidence, at least in regard to such things as they themselves believe in the absence of reason or evidence. Truly, once rationality is declared a hindrance to the discovery of “higher truth,” people are free to believe whatever they please without the least embarrassment.

Yet, in the case of the mainstream religions, if two people worship different Gods of love—each of whom demands that he (they are invariably male, you know) alone be worshipped—how are they to resolve their differences in the absence of reason and evidence? They cannot. They can but agree to disagree or, as usually happens when one or both sides thinks it can win, resort to intimidation and violence.

“A religion, even if it calls itself a religion of love, must be hard and unloving to those who do not belong to it.” –Sigmund Freud, Group Psychology and the Analysis of the Ego, 1921

If Freud was right—and I think he was—there can be no peace among religions; there can only be lulls in the fighting, and never any love.
Posted by Snowbrush 22 comments: