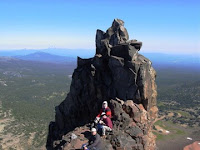 We went camping again last week—a two nighter this time—to a 19th century gold mining area that is littered with abandoned mines and ghost towns. The valleys being warm, we camped at the mile-high level.

Peggy and I both enjoy the woods, but her real passion starts at timberline, which is around 7,500 feet (2,286 meters) in Western Oregon. I think of timberline as a gray and barren area with few redeeming virtues aside from an expansive view, so I prefer to spend my time rhapsodizing over snakes, alder leaves, mountain streams, and other humble interests that only exist at lower elevations.

Peggy was a devoted climber (she’s in the middle of the photo) until arthritis forced her to give it up. She always wanted me to climb with her, but I couldn’t see the point in working that hard in the interest of recreation, and, as I said, the high country has a spiritual dimension for her that it lacks for me. The highest she ever got me to go was the 8,363-foot summit of St. Helens, and I wouldn’t have climbed it if Peggy’s friend Shirley hadn’t previously gone. Because Shirley is a known woos, I figured St. Helens just couldn’t be that bad. Well, I guess it wasn’t in one way, but in another it was pretty awful. Gray, gray, and more gray, all day long nothing but sharp gray lava under an intense mountain sun that made me feel like a cat in a microwave.

When we finally returned to the world of greenery, I was as happy as if I had been away for years.

On our trip last week, I left the narcotics at home (no more night sweats, diarrhea, and hallucinations in the middle of the woods for me, thank you very much) and just took sleeping pills. I couldn’t decide which ones to take, so I just tossed some Restoril and Dalmane in with my vitamins. Well, wouldn’t you know it, with only two kinds of pills to keep straight—one orange and one blue—I still got them mixed up, and double-dosed on the Dalmane. It didn’t seem to hurt me any, and I slept better than I have in months—if not in years. The second night, I double-dosed a second time. A few minutes later, we decided to get out of bed and watch the Perseid meteor shower. All of the stars looked like shooting stars to me, but I could pick out the real ones because they moved faster. I finally just sort of fell over backwards and, it being a warm night, Peggy left me where I landed. When she got up the next day, I was still in the same position. (If I were you, I wouldn’t believe QUITE everything I read here.) 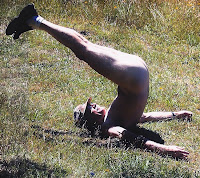 I have long been convinced that I would go insane if I couldn’t go camping regularly, and now that I haven’t been for two years prior to this summer, I think it safe to report that I was correct. Those who have only met me during those two years don’t know what my life was like for much of my adulthood, so I’ll tell you. It was hard manual labor punctuated by camping trips. I’ve long since lost the ability to do the former, but I’m regaining the latter, so maybe the other will come with it eventually.

I’ve decided that since I’m getting past the worst of the pain from my two shoulder surgeries, maybe I should develop a life other than the Internet, so I’ve joined three local atheistic groups. One of them is supposed to meet here this week to watch the movie Religulous, and it will be something of a return to the old days when groups met here all the time. I always enjoyed having people over, partly because I love my home and partly because I had rather stay here and have people come to me than for me to go out to be with them.

I know that I haven’t been visiting blogs as faithfully as I usually do, but what with it being summer, I just don’t want to spend so much time at the computer. I feel bad about that though. I can but ask that you pardon my absence, and that you let me know if anything momentous should happen in your life because, I assure you, I'm here if you need me.
Posted by Snowbrush 26 comments: