I judge my life - Part 4- The unpainted house 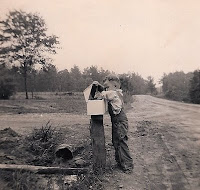 I passed my first ten years in an unpainted house (photo 1) on a gravel road (photo 2). It stood a few hundred yards from where Peggy and I were building our new home.

I was often lonely because the only other children in the area were cousins who were a few years older than I and whose mother (my father’s sister) didn’t like my “city woman” mother, and who consequently didn’t like me. The fact that my Granny—with whom we lived—made no bones of the fact that she loved me more than she had ever loved anyone didn't help relations. Yet, I remember those years fondly because my father (photo 3) was saner than he would later become, and as far as I knew, my family was a happy family. 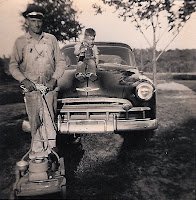 Until my sister was born in 1954, five years after myself, I was the center of the universe to my parents, my father’s parents, and an elderly dog named Mike (photo 4) whose fangs kept the rest of humanity at bay. I remember peeing on Mike as he lay in the dirt flopping his big tail against the ground. I considered this great fun.

Our other close neighbor was the Floyd King family on whose property was a gravel pit that was home to the water moccasin that killed their little boy. Like a lot of people, the Kings had a section of their yard that was swept. A swept yard is a child’s delight—cool, non-itchy, and smooth for toy cars and trucks.

Grandpa was opposed to indoor toilets for sanitary reasons, as he said, and even after we got electricity, it was prone to fail after every rain, so kerosene lamps lined the mantle. Our water came from a well that consisted of 8” concrete pipe that was sold in sections and descended a hundred feet or more into the earth. The long and slender well-bucket was raised and lowered by a hand crank, and had a float in the bottom that opened to allow water to enter, and closed when the bucket was full. I considered the well a mysterious and fascinating place that descended almost to the center of the earth and welcomed the toss of an occasional pebble followed sometime later by a muted splash.

We burned coal for heat—and perhaps for cooking for all I know. This now strikes me as odd since south Mississippi was hundreds of miles from the nearest coal mine. Yet, we had a little outbuilding that contained nothing but coal. Coal was an exceptional substance, unlike anything else I had seen or imagined, but I didn’t know what it was, and I didn’t like the mess it made. We had other outbuildings as well, all of which were covered with unpainted planks that had grayed in the weather. One was for smoking meat, another for chickens, a third for hogs, a fourth for tools, and a fifth for a garage. The biggest one was for cattle, and it had a loft. Only horse nettles grew near it, probably because cattle wouldn’t eat them. I say this in retrospect; I don’t remember being curious about much of anything at the time.

A little way down the gravel road was a gristmill, and an occasional mule-driven wagon bearing a family of Negroes passed the house. Sometimes, they let me ride with them.

The Mississippi heat was pervasive for eight months out of the year, and even worse at night because my mother didn’t believe in fans or open windows after sunset. “Drafts” and “night air” carried disease, she said. She also worried about buzzards. The South surely leads the nation as the home of choice for vultures, and my mother was convinced that they dropped germs. She would look out from time to time when I was outside playing, and if she saw them circling high overhead in gentle glides on their great wings, she would call me in somewhat frantically.

Rattlers, cottonmouths, copperheads, red wasps, yellow jackets, and roosters were more realistic threats. The one I feared most was roosters because that was the one that plagued me most, but my worst encounter was with a speckled guinea hen. Unknown to me, it had its nest in a ditch, and it flew atop my head one day when I came too close to the eggs. I ran toward the house screaming as it clawed my scalp, but I nearly forgot my terror when the screen door flung open and my elderly Granny (photo 5) came charging across the yard with blood in her eye and a broom in her hands. It was surely the first time she had run in decades, and it was no doubt the last. One species’ maternal instincts had clashed with another’s, and I’m happy to say that mine won.

When I was almost five, Grandpa died. I have pictures of us together (photo 6), but I only have one memory of him, and that was because he did something unimagined; he scolded me. I was sitting among the chickens at the time (photo 7), and all of us were happily eating from the same trough. I didn’t even know he was around when he suddenly began yelling as if I had done something terrible. This man who had beaten his own sons had never even raised his voice to me, his favorite grandson.

Soon after his death, we got a bathroom, and it was also about this time that my father gave up his job in town and built a small grocery store in front of our house. He and my mother also farmed, but when the store burned one night, the money from farming wasn’t enough, so he eventually went back to maintaining the holdings of Gerald Kees, a rich man and the local Buick dealer. I still have the melted coins from the cash register. My father naturally suspected arson.

When I was eight, my father gave me my first real gun, a .22/.410 over-and-under (two barrels, one atop the other). I went hunting alone that first day, and killed a bird that was singing in a pecan tree. Its shattered body didn’t give me the feeling of triumph I expected, and I sought to atone for my sin by having my Granny cook it for me. I used my gun mostly for shooting opossums that got in the hen house. I left their bodies for my father to remove.

I can’t say now why my father exposed me to death when I was so young. Every Sunday morning, he would have me kill a chicken for dinner. I was too young to kill it outright, so he would hold it while I sawed its head off with a butcher knife. Then, he would toss it from us, and we would watch it “dance” as the blood splattered. I didn’t know what death meant or that a chicken could suffer, so I laughed. One day, I saw my father kill a stray dog with a piece of pipe, and since my best friends were dogs, I began to understand death, and my laugher stopped. Maybe he thought he was making me tough so I could better face life, but it didn’t work. 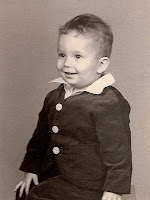