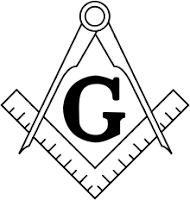 People are generally confused about the levels and organizations within Masonry. My father, for example, thought that an uncle who was a 32nd degree Mason had reached the pinnacle of the order. He had reached the pinnacle of the Scottish Rite (except for the 33nd degree which is rewarded for meritorious service), but not all Masons go into the Scottish rite.

I went through the York rite, which itself contains three lodges (the Royal Arch, the Cryptic, and the Commandery); but many Masons never go beyond the basic unit of Masonry—the Blue Lodge. The Blue Lodge only has three degrees, but, unlike the York Rite and the Scottish Rite in which the candidate simply has to take certain oaths, the Blue Lodge degrees must be earned through extensive memorization. Since the material to be memorized is unwritten except for the first letter of every word, candidates work with tutors. I gave back the proficiencies of my three degrees in the short space of two months. In the wording of Masonry, I was “initiated an Entered Apprentice, passed to a Fellowcraft, and raised to the sublime degree of Master Mason.

Most people know that Shriners are Masons, but are unaware of the relationship. The Ancient Arabic Order of the Nobles of the Mystic Shrine is not a lodge but a recreational and philanthropic organization that exists in some Masonic jurisdictions (grand lodges) and is banned in others.

The various grand lodges hold the highest authority within Masonry. Some countries have one; others have many. The U.S. averages one per state. If a grand lodge should stray too far from the accepted tenets of Masonry, it will be shunned, and other grand lodges will start a new grand lodge within its jurisdiction. No member of a shunned lodge is accepted as a Mason except within his own grand lodge.

In this country, the Prince Hall Lodge was a Negro grand lodge that was unrecognized by most if not all of the traditionally white lodges. Shortly after I became a Mason, the Idaho Grand Lodge recognized Prince Hall. Oregon did not, and this created hard feelings between them.

Another matter about which there is much confusion is the letter G that appears in the middle of the primary Masonic symbol, a compass laid atop a square. Most assume that the G stands for God, but it also stands for geometry, which makes more sense when the setting is considered. Masonry uses architectural tools as metaphors for building a good life.

Finally, there is the question of why Masonry is officially known as Freemasonry. The reason is that the medieval guilds from which Masonry sprang were originally for working masons only. When they began taking in members who were not working masons, they referred to them as freemasons.

I was honored tonight to have my name mentioned as a possible candidate for junior warden next year. This would put me on track for being "worshipful master" in two years. Twice, I was "noble grand" of my Odd Fellows Lodge, but since few Odd Fellows memorize their offices (I was one who did), the demands are lower. I returned to Masonry because I wanted to have much expected of me. I doubt that I could ever love it as much as the IOOF, yet it offers a striving for perfection that they have abandoned.

As membership drops, many lodges lower their standards. This seldom gains them a significant influx of fresh blood, while it does degrade much of what they stand for. For example, when I was on the IOOF officers’ installation team recently, I visited lodges in which the members looked like bums and acted as if they had never seen the inside of a lodge hall. It was this experience that led me back to Masonry.
Posted by Snowbrush No comments: