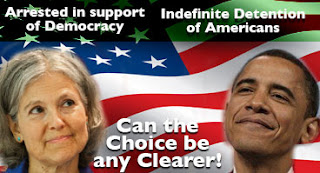 I voted today—Oregon has mail-in balloting—but I listened to the debate tonight for laughs, and was glad I did because I learned a lot about America. For example, “America remains the one indispensible nation,” said Obama, although he didn’t clarify whether he meant that all the other nations put together are dispensable, or whether it’s just some of them, or maybe only one of them that the rest of the world could do without.
Romney informed me, twice in as many sentences, that, “America is the hope of the world,” and I was delighted to learn that everyone looks up to us the way they do, because we’re certainly worthy of it—I mean, just look at all the good things we do with our missiles and stuff. Then Romney accused Obama of wanting to take money away from our military, and Obama looked hurt, but he must have pulled himself together pretty quickly because he said with obvious pride that, under him, America spends more money on its military than the next ten biggest military spending nations on earth put together, and I thought, whoa, way to go, bro.
Our ability to kick ass combined with our willingness to kick ass is probably why both men agreed that it’s America’s job to “continue promoting peace in the world” (I hadn’t heard that we had already been doing it, but I was glad to find out). After their touching words about how peaceful America is, they agreed that war with Iran is certain if that country doesn’t stop trying to build a nuclear bomb, and they expressed their mutual willingness to also go to war in defense of Israel if anyone should mess with Israel. Like, man, let’s hope nobody attacks Israel, or it and Iran will be two more wars we’re fighting to bring peace to the world.
In case you’re wondering, I voted for the Green Party candidate for president. She’s in the picture above, the caption of which refers to the arrest of her and her running mate during the last debate (they were protesting the fact that only only two of the candidates got invited to the debate). The rest of the caption concerns Obama’s willingness to ignore parts of the Bill of Rights that don’t suit him. You think the Constitution protects you, and then you discover that it’s only as good as the guy in charge says it is, and two of those guys in a row have ignored what we used to call our “inalienable rights.” The funny thing is that hardly anyone seems to care. This was exemplified by the fact that the subject didn’t even come up during the debates. Maybe Romney and Obama were too busy thinking about who to bomb next in the cause of peace.
Posted by Snowbrush 14 comments: