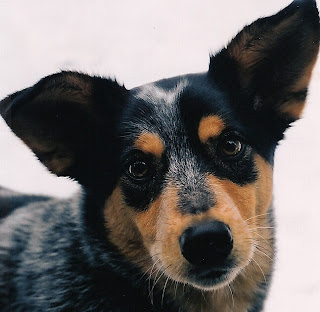 We took Bonnie to the vet today to be euthanized. Because we got to the clinic ten minutes before they closed for the weekend, we had to use a vet we didn’t know. She asked if we wanted to be present, and we were taken aback because we’re not the kind of people who avoid the presence of death. As the vet administered the fatal injection, Peggy lay on the floor hugging Bonnie and sobbing while I jabbered on about unrelated things, so you might say that I wasn’t any too present for death myself.

When we got home, the first thing Peggy wanted to do was to cuddle, but the first thing I wanted to do was to bury Bonnie. We waited overnight to bury Baxter when he died three years ago, and by that time, he was cold, stiff, and looked pitiful, so I wanted to get Bonnie in the ground while she was still warm and looked like she was asleep. I’ve been in so much physical pain that I worried that digging a grave would leave me worse-off, so Peggy helped.

Before the burial, I took Bonnie indoors and showed her to our cat because I wanted him to know why she went away. Maybe it didn’t help, but I’ve done that with other pets, and never saw any reason to think it was harmful. While Brewsky smelled Bonnie, I wondered if I could ever love him the way I’ve loved so many dogs. I can tell that there’s a lot going on in that little head of his, but I can’t usually tell what it is, and that leaves a gulf between us.

After the burial, I felt like I was in a movie in which happy images of Bonnie’s life ran before my eyes one after another. Things I hadn’t thought of in years came back like a vivid dream in resplendent color, and I beat them down as best I could. I wanted to be alone, so while I did yard work, Peggy called friends and relatives for support. I was surprised because Peggy usually avoids talking on the phone. After thinking about it for two hours, I took 25 mgs of oxycodone, and it cheered me considerably.

Some people don’t understand how anyone can grieve for a dog, but I’ve grieved more for dogs than for any of the people I’ve lost, probably because my dogs were with me all day everyday and were innocent and dependent.

Peggy won’t want another dog for years, if ever, but I already want one. On the other hand, the last three years of Bonnie’s life were tough on Peggy and me because Bonnie became blind, fearful, arthritic, and started to lose her hearing. People say that dogs adjust well to blindness, but Bonnie spent those years walking into walls and furniture, and it really got to me until I started taking Cymbalta and marijuana.

It’s also true that I started thinking of dogs differently after I had my shoulder surgeries. After two of those surgeries, Peggy was out of town for a week or more during the early stages of my recovery and, it being winter, I found it really, really hard to take two dogs (Baxter was still alive after the first surgery) walking in the seasonal drizzle everyday. I couldn’t dry them and clean their feet adequately with one hand; I worried constantly that they would trip me; and I had a hell of a time just keeping myself from getting wet. One day, a pit bull attacked Baxter, and I had to beat it off with one arm. Luckily, it was a young female and not too aggressive.

After my third surgery, Peggy was out of town again, and Bonnie became ill with autoimmume hemolytic anemia. For at least a week, she was so sick that I expected her to die at any moment. She needed medicine every eight hours, but this meant having to shove the pills so far down her throat that she couldn’t spit them out, and I couldn’t do it with one arm, so my friends Ellie and Josh came over every eight hours. It was then that I started to think of dogs as a liability that I would be better off without. I also resented Bonnie because throwing tennis balls to her hundreds of times a week for years was probably what ruined my shoulders.

For the last two years of her 15 years and 7 months, not a day went by but what I wished she would die sooner rather than later because her infirmities were so upsetting, especially listening to her bump into things, which made me cringe every time she did it. Dogs need far more from us humans than most of us are able—or even willing—to give them, and I found this especially true of a blue heeler because blue heelers want to be on the move every waking moment. If she hadn’t been my dog, I wouldn’t have believed how much exercise she needed, and when she went blind, I couldn’t satisfy her need except by taking her walking, and my arthritic knees made even that difficult. I was afraid that when she did die, I wouldn’t enjoy remembering her because her last few years were so hard for me (they seemed harder for Peggy and me than they did for her), but I don’t think that’s going to be true. I think I’m going to remember her whole life.
Posted by Snowbrush 25 comments: