The truth about Peggy, or at least a start 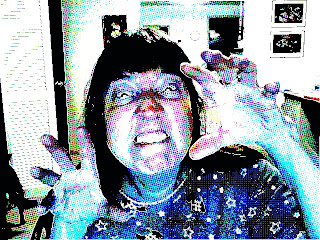 I have grown, over the decades, to hate cleaning house. When I tell Peggy that I hate cleaning house, she says that there is a lot that she hates about her nursing job, but she has to do it, and so it is that I have to clean house, so I might want to work on being less whiny about it. Hearing this helps me tremendously, but I invariably forget and have to be reminded a few times a year. I can’t say that she seems happy to remind me, but I trust her to do it, and she has never let me down.

Peggy has other, shall we say, features, that I might allude to while I’m at it. Peggy is intimidated by credit card scanners, so she gave me the job of making sure she always has cash in her billfold. Why she is intimidated by credit card scanners, God only knows (said the atheist with the curly horn), but she generally avoids shopping partly for this reason but also because all she ever wants are buttons, and she can get those from her button cronies who act like pusher/druggies would act if pusher/druggies were addicted to clothing buttons instead of heroin. Peggy is also intimidated by airplanes and spiders. If she’s not worried about an airplane falling with her, she’s worried about one falling on her. Her idea of hell would be eternal entrapment in a burning airplane filled with panicking tarantulas.

Peggy is going away tomorrow for four days. I will be happy, but I would be just as happy if she stayed home. Peggy says it hurts her feelings that I don’t suffer when she’s gone. Peggy also says that she too would like to be alone sometimes, but she can’t because I never go anywhere. This hurts my feelings because of the way she used to bitch when I spent months at a time traveling all over the country having sex with other women. Now she’s bitching because I never go anywhere?! I told her that, look Peggy, I’ll give you some time alone; I’ll put a tent up in the backyard, and you can stay out there all you want. When I went out to put the tent up, she wouldn’t let me back in. Peggy is a lot harder to get along with than any woman has a right to be. I often tell her that if a beautiful and generous rich woman comes along, she can kiss her marriage goodbye, but she just laughs.
Posted by Snowbrush 19 comments: