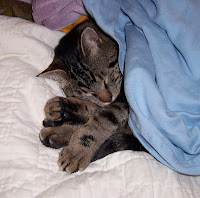 I now understand why people pamper cats. It’s because cats are so enamored of luxury that it’s rewarding to give it to them. Dogs enjoy luxury too, but a dog would go through hell to be with his master, whereas cats are not so constituted. Therefore, what better thing can a person do than to pamper his cat?

I write about heavy subjects because that’s how I think. I’m forever absorbed by reflections pertaining to one idea or another, so I will write about it over a period of days, doing both revisions and whole new approaches to the subject. I love to play with words and ideas this way. In fact, it’s the main thing that keeps me going. I also need physical labor, but too much of it seems like dissipation. Trips to the mountains are also good.

Things you don’t know about me:

I bake my own whole-grain crackers. I got my first recipe from an Episcopal priest’s wife, and afterwards baked crackers for the Eucharist each week until a lady who attended regularly got throat cancer and the church went back to the melt-in-your-mouth “fish wafers.” I've continued to bake crackers for myself during the intervening 35 years, but I’ve branched out from the original recipe because cracker dough is very open to experimentation. I name my various crackers after their defining flavor, such as rye, corn, wheat, walnut, cheddar, and Parmesan. Before each of my three shoulder surgeries, I had to bake a big supply of crackers because it would be four months before I could roll out dough again.

I have memorized at least thirty poems including more than one apiece by Robert Frost, Edwin Arlington Robinson, and Edna St. Vincent Millay. Wordsworth's "Daffodils," Keat's "La Belle Dame Sans Merci," and Heine's "A Maiden Lies in Her Chamber" are three of my favorites by other poets. 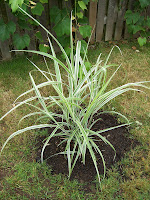 I recently planted two clumps of bamboo and five of a variegated grass that grows nine feet tall. I’ve adored variegated grass for years but this is the first I've grown. I wake up each morning and look out the window at my variegated grass, and I smile. I take such joy in plants that I have no words for it.

I try to get to the Cascades each year before the bears eat all the salmonberries. These resemble blackberries but are orange. They are also three times bigger and three times juicier. They practically fall into your hand when they're right for eating. Once in your hand, they flatten out, because they're hollow in the middle. The bears and I also compete for salal berries, but they grow best in the Coast Range. Once while biking down a logging road looking for berries, Peggy and I surprised a mother bear and her cub (and vice versa). Black bears tend to abandon their cubs rather than fight for them, and this one was already on her way, so I stopped the bike and said, "Oh, Peggy look," but she didn't answer. When I turned toward where I thought she would be, I caught a glimpse of her way down the road, pedaling as fast as she could in the other direction.

I love wasps. The ones in yesterday’s photo (taken during soffit work) are typical of most Oregon wasps in that they’re so gentle that you can all but touch their tiny nests without fear of harm. I literally forget that they are there even when I'm working next to them. This is a night-and-day difference from the big and aggressive Mississippi wasps that live in nests of hundreds, yet I loved them too. I built the nesting box in the bottom photo for solitary wasps, and I have a bald-face hornets' nest hanging in my den. When people ask if it still has hornets in it, I tell them that, yes, it does, but if they keep their voices down, they'll be okay.

I eat two, 22 pound watermelons a week, all summer and into the fall. I prefer watermelon to chocolate, and that's saying a lot. I also have a weakness for mayonnaise, which I often mix with Parmesan and nutritional yeast and spread on whole-grain crackers.