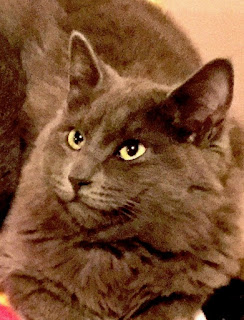 I share my home with four gentle and obedient cats who adorn my life like precious jewels, and a fifth, Harvey, who is cocky and impudent. Only he fights over food; only he brazenly ignores my wishes; and only he makes me run from one end of the house to the other to see what he’s up to when it sounds like he’s rearranging the furniture. He stares into my eyes with the cunning of a cartoon fox, and he disobeys me even while I’m scolding him for disobedience. I chase him around the house yelling, waving my arms, and, sometimes, slapping the upholstery with a yardstick, but after a few circuits, he rolls onto his back—like ten-year-old Brewsky did when he was a kitten—and invites me to rub his belly.

Harvey is my only cat who, when we’re cuddled-up in bed at night and I’m rubbing his belly with one hand, pins my other with his claws and squeezes a finger between his teeth as he dozes off. Peggy insists that I not let him bite me, but I only follow her advice on the rare occasions when he causes me pain.

But why does Harvey pin me with teeth and claws? A cat’s unprotected abdomen is so vulnerable to evisceration—by another cat’s hind claws—that many cats will bite anyone who touches that area. Then there are cats like Brewsky who will allow humans to do pretty much anything to them (I sometimes answer the door with Brewsky hanging upside down from under a forearm). Harvey resorts to the middle ground of allowing access to his abdomen while keeping his teeth and claws engaged.

For much of my life, I found it intimidating to sit or lie while other males were standing, so when I did, I would keep an eye on them, although I knew that it offered little protection. When I observe Harvey’s protective measures, I see myself. Although Brewsky always gave me complete access to his body, I appreciate Harvey’s gift even more because his desire to surrender goes against his need for safety.

As I stroke him, I lose myself in adoration of his foxy face and long fur—I prefer longhaired cats, and he’s my only longhair. Although Peggy laughed when I called my little ten pound bundle of cuteness a man’s cat, Harvey truly is a badass who goes for broke while roughhousing with fifteen-pound Brewsky. Yet, I know that Brewsky would never really harm him, and I also know that Harvey’s exaggerated self-confidence is the result of human protectiveness. May Peggy and I never find ourselves unable to maintain the illusion, and may he never discover how nearly powerless his human parents really are. Perhaps, it would be possible for me to love him more, although my heart would burst if I tried.