Abandoned and naked with only a schnauzer for solace 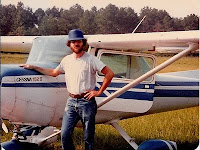 A letter by a follower from Slidell, Louisiana, reminded me of the following true story.

In 1983, I got a pilot’s license and bought an airplane because I felt hemmed-in by the provincialism of southern Mississippi, and thought that flying would broaden my social and intellectual horizons while expanding my spatial ones. This did not prove to be the case because of the slow cruising speed of my plane (85 mph) and the influence of Mississippi’s frequent thunderstorms. Even so, Peggy and I took trips to Arkansas, Florida, Louisiana, and Texas. We had two engine failures and one electrical fire along the way, but I’ll save those stories for another time.

Ever on the lookout for stimulating places to visit, I read about a nudist camp called Indian Hills (an odd name in an area in which the highest peaks are I-12 overpasses) near Slidell, I proposed to Peggy that we fly down. When she expressed somewhat less than zero interest in going, I went by myself. I had imagined that nudists would be of a liberal and educated bent, but this was not the case. I had hardly been there an hour before a large, drunk, and completely naked redneck challenged me to a fight. His wrath had erupted when I said something about him being gay based upon my observation that he was wearing a single earring.

He vociferously informed me that merchant seaman—of which he was one—also wore single earrings, but in the opposite ear to that favored by gay men, a group that he held in extremely low esteem. I apologized profusely, not because I felt badly about my error, but because I would have apologized profusely no matter what I had said. For example, if I had called him a human, and he had preferred to think of himself as a three-toed frog from Mars, I would have apologized just as profusely. Maybe I'm vain, but if I’m to be beaten to death, I want it to be over something that matters.

I stayed the night, and flew home the next day with no plans for another trip. Several months later, I was telling my friend Woozy Toosh (not his real name believe it or not) about the camp. I had known Woozy Toosh for much of my life, and was well aware that he was an excessively timid person, so I was surprised when he asked me to go there with him. I said I would be glad to, and we agreed to take his car. He made me vow secrecy about the trip because he worried that he would lose his job as a school guidance counselor and that his fundamentalist Christian wife would leave him. These were realistic fears. 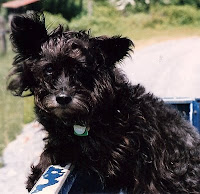 Woozy Toosh, my little dog Wendy, and I drove down one August afternoon and stayed in a Slidell motel before going to the nudist camp the next morning. I was a little—but not a lot—surprised that night when he brought up the possibility of him and me having sex. I politely declined.

The next morning, Woozy Toosh, Wendy (you can tell from her haunted eyes that she had seen things a dog was never meant to see), and I drove to the camp. He was reluctant to take his clothes off (he had mostly wanted to see other men without their clothes), and he asked me if it was strictly necessary. I said I didn’t think so, but that he might feel even more awkward if he kept them on.

Woozy Toosh finally did undress, but he used a newspaper to cover his privates as he made a beeline for a chaise lounge. I thought he looked like Inspector Clouseau who found himself in similar circumstances in one of the Pink Panther movies, but I didn’t say anything. After we had sat down, he lost no time in covering himself from mid-thigh to mid-waist with the same newspaper. Only then did I notice that it was in reality a National Enquirer. I could tolerate homosexuality, but learning that I had a friend who read the Enquirer was a bit much.

After an awkward half hour, Woozy Toosh asked if I was ready to go home. I had anticipated such an outcome before we left, and had exacted his promise that we would stay at least six hours. By the time another half hour passed, he had asked me twice more. When I became testy, he developed the sudden urge to spend the day window-shopping at the Slidell Mall. We agreed that he would pick me up around 3:00, and he left with my clothes in his car.

Just before Woozy Toosh was to return, two men got into a fight near the entrance to the camp, and the police were called. I worried that when Woozy Toosh saw them, he would think it was a raid, and not slow down until he was across the state line. Just in case this should happen, I thought it behooved me to make alternate plans for my return home. Okay, I thought, it’s a two-hour drive, and I’m butt naked with no clothes, no friends, and no money. Of course, I did have a schnauzer, but she hardly seemed like an asset. All I could think to do with her was to hold her over my privates while I hitchhiked, but that didn’t seem like really workable solution, even after dark. Besides, Woozy Toosh had left his National Enquirer in the changing room, and if worse came to worse, I figured I could take some string and improvise a skirt.

3:00 was long gone before the cops looked like they might even be thinking about the possibility of starting to think about leaving. It was my firm belief that they were actually a great deal more interested in looking at the women they weren’t arresting than in the men they were. In fact, they didn’t appear to be making much headway in arresting anyone. Their tardiness gave me a great deal more time to come up with a workable plan, but none was forthcoming. I could have called Peggy, of course, but she would have regarded the trip as an imposition and have undertaken it primarily for the dog.

Woozy Toosh returned a half hour after the cops left. I have never at any time wished that the trip had ended otherwise even if it would have made a better story.
Posted by Snowbrush 51 comments: