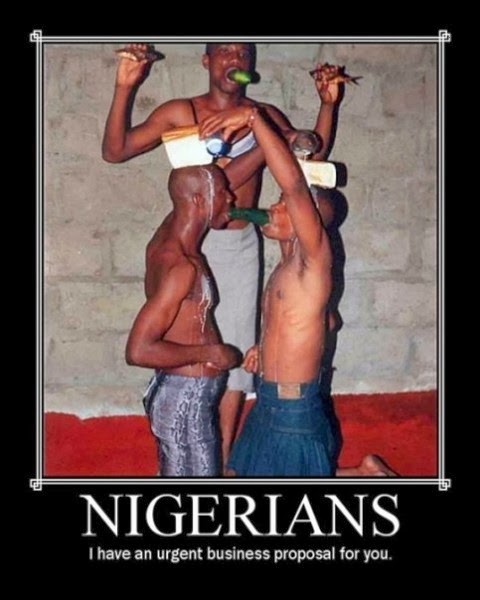 I know a former missionary to Nigeria, a country infamous for its Internet scams. She describes it as a land in which honor is nonexistent, money counts for everything, and people learn to cheat one another from the cradle. I didn’t believe her because, as I imagined, societal cohesion depends upon trust more than law, so if you create an environment in which no one can trust anyone, you destroy the possibility of a cohesive society. She stood her ground, saying that the kind of greed and manipulation that people in this country associate with the worst of the worst—Wall Street bankers and hedge fund managers—is status quo in Nigeria where to be honest is to be a sucker. I’ve since come to wonder how different America is from Nigeria. I’ll outline the reasons for my concern by sharing a few news items and personal experiences from the past couple of weeks.


1) The number of people imprisoned in the US has risen by 800% in the past 30 years making us the world’s leader in locking up our own people. One reason for the increase is that US prisons have increasingly come under private management, and before a company will agree to manage a prison, the government must agree to maintain an occupancy rate of 90%. Rehabilitation hell! We need people in prisons, or at least Prison, Inc. and the government officials who negotiate the contracts do, and they’re the ones in charge. Why else would 60% of the prison population have been locked away for non-violent crimes?

2) Next month, I’ll be eligible for Medicare, which is government-run health insurance for people who are old or disabled (taxpayers pay into the system throughout their working lives in order to benefit from it when they need it). Because Medicare isn’t sufficient to keep a person from going bankrupt due to medical expenses, the government works with private insurers whose job it is step in where Medicare leaves off. There are dozens of these insurers, and they offer dozens of different plans that cover various things and include various extras. Determining which insurer and which plan is best is impossible unless you have a staff of lawyers who are versed in alphabet soup and willing to read through one 150-page policy book after another, each of which is meant to defy comprehension. Why, if the goal is to provide health care to those whose minds and bodies are growing weaker due to age and/or disability, doesn’t the government create a simple system under which the policies of these private insurers can be easily understood and compared or, better yet, eliminated altogether? My guess is that such a system would defeat the goal, which is to make money for private insurers.

“But why,” you might ask, “does the government care about making money for private insurers?” Because those insurers provide politicians with massive campaign contributions, expensive gifts, and private sector sinecures. “But why does selling incomprehensible insurance policies to Medicare recipients enable insurance companies to make more money?” Because it eliminates cost-versus-quality competition. It’s like when you go to buy a mattress, and every store has a different name for the same product. By making it impossible for customers to compare prices, stores can compete on the basis of window-dressing rather than cost or quality, and this means more money for everyone, except the consumer. What makes this obfuscation especially immoral in the case of Medicare—and keeping people in prison—is that it harms those who are the least able to protect themselves—the ignorant, the impoverished, the mentally challenged, and the taxpayer.

3) There was a time when only loan sharks charged 30% interest, but the fools didn’t know enough to buy the government so that they could do it legally. Who do you turn to when you can’t pay your medical bills or you’re facing foreclosure? Chase and Citibank are there for you when you think things can’t get any worse, but what happens when things do get worse, when the medical bills keep coming, the bank keeps threatening your home, and you can no longer use your credit cards to juggle your bills because you can no longer afford the minimum monthly payments? Maybe it’s the time to remind yourself that America is “the land of opportunity,” the land that every politician calls the fairest, the most generous, and the most compassionate nation on earth?

4) When the bills came in for my latest round of physical therapy, I noticed that I had never once received what I was charged for—entire series of 15-minute ultrasound sessions, 15-minute manual manipulation sessions, 15-minute exercise sessions, and 15-minute cervical traction sessions. When I finally found someone other than the therapist to complain to, he responded as follows about Oregon Medical Group’s billing policy: “…the Physical Therapist can provide anywhere from 8 minutes to 22 minutes and bill for 15 minutes of therapy.” No session ever ran over 8 minutes.
5) Reminisce Magazine. Its writers receive no compensation for their stories and photos, and the company that owns Reminisce owns a slew of other quaint publications. Peggy likes Reminisce because it takes her back to the ‘50s when she believed her parents could protect her from serious harm, when—as she remembers it—people were kind and noble, and America was admirable. I want Peggy to have a magazine that brings her such joy, and I wish in retrospect that I had kept its ugly little secret to myself, its secret being that, as soon as you subscribe—and Reminisce encourages its readers to subscribe for years at a time—it starts sending renewal notices that begin with “This is your last chance to keep Reminisce coming…” but don’t give you a clue as to when your current subscription expires. Like most cheats, Reminisce preys on a vulnerable population.

6) But what of the rest of us? Is it even possible to be an ethical American? I’ve focused on those who get rich by hurting people, but what of the millions who work as cogs in the rich people’s wheels, the ones who staff the magazine subscription centers; who administer the “Medicare Advantage Plans;” who work in the prisons; who turn people away because they can’t afford medical care; who, in order to have a secure retirement, invest in companies whose policy is profit before all; all these plus the 300-million people whose taxes finance America’s wars and war crimes, its profit-driven destruction of our environment, its arrogance, its greed?

That which I wondered about Nigeria, I now wonder about my own country. What cohesion binds a nation of people who equate morality with doing the legal minimum, who elect conservative politicians for the purpose of abolishing such legal protections as still stand between big business and the consumer, and between the patient and the healthcare industry? How far do we have to go before we’re like Nigeria, and what will be the cost when we are? I think Peggy is right about the old days in that, despite some significant human rights gains, too many of the gains America has made have been technological, and too many of the losses have been in such areas as trust, idealism, and community. Pay attention to the news and current culture. Look at the filth that is on TV; observe the isolation of people on cellphones; note the abuse that is commonplace in Internet discussion forums; listen to the venom of talk radio. Things which once would have been unspeakably rude, tacky, vulgar, trashy, mean-spirited, greedy, self-abasing, and self-centered, are now the norm. The biggest difference between today and much of my life is that Americans used to be optimists. Even during the darkest days of the ‘60s, the feeling was that positive change could and would come. When was the last time you heard anyone but a politician say that?

I know that this post proves nothing, but for those of us who remember an era when houses were seldom locked and bicycles didn't even have locks, experience means a lot, and twenty years of dropping crime rates matters but little. I pity those who have never known this country to be any way but what it now is because, despite its former faults, there was a time when I could say with a straight face that America stood for that which was good.
Posted by Snowbrush 17 comments: