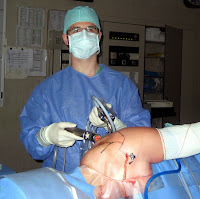 I struggle to make doctors see me as a person because my health is a very personal matter and because, if they see me as a person, they will do better work. For example, radiologists find more tumors after being shown pictures of the people whose x-rays they’re studying. My problem with getting doctors to see me as a person is that a lot of doctors, especially surgeons, are hell-bent on staying detached, clinical, sterile, emotionless. They regard a patient’s fear and suffering as an irrelevant and annoying nuisance rather than something requiring compassion. If possible, they would prefer that people just drop off whatever body parts are giving them trouble. I don’t play these games at all well, which is partly why Mark (I call doctors by their given names) is my fourth orthopedist in eleven months.

I gave him the following today. My surgery is next Friday. Mark said I’ll be first in line because he takes the more challenging cases first. I hope this means that he anticipates an easy day.


(Mark, Peggy and I went to the hospital yesterday for my pre-op, and I later wrote the following for my blog. Please don’t take it personally. It is not about you; it is about my fears.)

The clerk says that my surgery will cost $10,000, and that’s just for the O.R. and post-op care. The surgeon’s and the anesthesiologist’s bills will be separate.

The nurse says, “I see that you’re having rotator cuff debridement and tendon reattachment—that is SO PAINFUL. People who have had a lot of joint surgeries say it’s the WORST. We had to take my grandfather back to the hospital after his surgery because his pain got OUT OF CONTROL. Why do you think YOU have this problem?”

“It started in yoga, and was made worse by throwing tennis balls to my blue heeler.”

“Well, you’ll be throwing UNDERHANDED from now on, EVEN IF the surgery works.”

Nursey is TOTALLY UNHAPPY that Peggy is going on TWO TRIPS the month after my surgery. We try to explain that these are IMPORTANT trips that were planned LONG AGO, and that I FULLY support. Nursey frowns.

Nursey takes my blood pressure; it is WAY higher than it has ever been.

“May I have a nerve block instead of a general,” I ask hopefully. “I HATE being put to sleep.”

“Yes, the block might not be enough without the general, but with the block, you can have a lighter general. Also, the block lasts half a day, so you will need fewer narcotics after you wake up.”

“Are there many risks with the block?”

“Just one big one really. It sometimes deadens the nerve that makes you BREATHE.”

“Uh, the nerve WILL WAKE UP again—right?”

“Well, they’re following patients now to see if any of them EVER recover.”

I wonder why “THEY” don't already know this. Nerve blocks aren’t NEW; are they? But I don't ask. I'm too busy developing FACIAL TICS and HYPERVENTILATING. I remember a documentary in which a woman was BEHEADED in a sports arena in Saudi Arabia, and I envy her because the physical part of her suffering was over FAST.

Peggy puts her hand on my arm. I assume she has a question. No, she's just trying to CALM me DOWN. Not that I'm EXCITED. I mean ALL I’m doing is turning my LIFE and my ability to BREATHE without a respirator over to a bunch of STRANGERS who I hope aren’t in the 50% of all doctors and nurses who are BELOW AVERAGE. If I’m REALLY lucky, none of my ABOVE AVERAGE doctors and nurses will be ALCOHOLICS, or have COLDS, or be in the middle of MESSY DIVORCES, or HATE MEN, or have stayed up all night PARTYING. MAYBE the MAJOR EARTHQUAKE that is FIFTY YEARS OVERDUE won’t hit, and MAYBE the anesthesiologist won’t SNEEZE while he’s injecting my NERVE BLOCK.

“Well, if a nerve block won’t do anything worse than destroy my ability to BREATHE, sure, LET ME HAVE IT. For dessert, I would like DILAUDID, FENTANYL, VICODIN, DEMEROL, and PERCOCET, all mixed together and smothered in a thick and creamy MORPHINE SAUCE. Oh, by the way, could your bring us some VALIUM STICKS?”

After finishing up at the hospital, we go to Fred Myers to buy EXTRA LARGE SHIRTS that will fit OVER my arm, and VELCRO SHOES because I won’t be able to wear a regular shirt or tie regular shoes, maybe for MONTHS.

I decide that I want a drink. Then I think that, no, I NEED a drink—a double. If liquor didn’t turn me into a bumbling, stumbling, dizzy, nauseated, cotton mouthed moron, I might come to like it. Even with these downsides, I like how I feel WITH IT better than how I felt WITHOUT IT.

“How about a nice movie to take your mind off things,” Peggy asked.

It might take a bit more than a movie, I think, but don't say anything.
Posted by Snowbrush 25 comments: