My doctor, my friend? 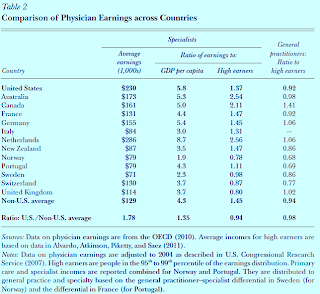 “Don’t you feel violated?” Peggy asked when she saw the bill, $250 of it for glancing up my nose.

I feel violated every time a doctor’s bill comes, but $250 for a ten second glance up the old snoot does give the phrase pay through the nose a whole new meaning. The average medical specialist makes more money for the few minutes that he spends with the average patient than a minimum wage worker makes all week, and more than what most everyone else earns all day. American doctors make nearly twice as much as doctors in other “developed nations” (see first graph), and their fees are increasing at seven times the overall cost of living, yet America is falling further and further behind in life expectancy (see second graph) and nearly every other measure of quality care. Over the past several weeks, I’ve felt cheated by six doctors and a dentist (I paid $520 last week for two small fillings that took 25 minutes total), and it doesn’t set well. In fact, I’m enraged. I mostly get along well with doctors, but it isn’t because I respect them, but because I want to get the best service for the least aggravation. Besides, they would charge me for the time I spent complaining that they overcharge. 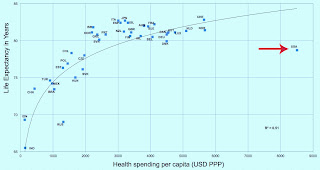 Doctors argue that they deserve their inflated salaries and more too* because they went to school for a long time, but doctors in other countries go to school for a long time without feeling the need to charge so much that millions of people (most of whom have insurance) can’t afford them (“In 2013, 37% of U.S. adults went without recommended care, did not see a doctor when they were sick, or failed to fill prescriptions because of costs, compared with as few as 4 percent to 6 percent in the United Kingdom and Sweden. **) “Only in America, land of opportunity…”  Yes, only in America, a nation that considers it no more immoral to deny someone medical care than to deny her a yacht.

Regardless of what a few politicians might say, under the value system by which America lives, whatever you can afford, you have a right to, and whatever you can’t afford, you don’t have a right to. For example, millions of Americans oppose abortion on the grounds that life is sacred, yet those same people--and the country itself--base one’s post-birth right to life on personal wealth. It is for this reason that, when we refer to a person’s worth, we follow the word with a dollar sign. “Mitt Romney is worth $250-million”; “Joe Blow is worth $500.”

Do you ever wonder why the number of years a person goes to school should be the determinant of his or her income? Why not pay the most for the jobs that are the dirtiest, or most dangerous, or most boring, or the hardest on a person’s body? Watch a carpet installer crawl around on a floor, breathing filth from the carpet he’s taking up, and dust and formaldehyde from the carpet he’s putting down by kicking a stretcher with his knees; and ask yourself how long anyone’s body can survive such work, and reflect on the reality that, when his body gives out, he’ll be facing decades of pain and disability without adequate medical care.

What follows is a further sampling of my problem with doctors. They provide an essential service, but they don’t compete cost-wise, and if you can’t afford insurance, they charge you more because you lack the clout to negotiate their fees. With or without insurance, a doctor won’t see you without charging you hundreds of dollars, and you can’t decide if a particular doctor is right for you without paying it. To make matters worse, it can take months to get in to see a specialist, only to find him in such a hurry to get you out again (20% of physicians see more than 100 patients a week***) that it destroys any hope you might have had that he would care about your welfare. If worse comes to worse, and you mistrust your doctor to the point of wanting another, you have to start the wait--and pay the hundreds of dollars--all over again, and that’s assuming that every area specialist of the type you need doesn’t work in the same clinic, in which case, they won’t allow you to see another doctor because they care a great deal about their egos and little about your health. In short, a patient’s relationship with a doctor is one in which the doctor holds all the power and comes out richer no matter what, while the patient, more often than not, receives inferior care and is forced to pay through the nose for it. 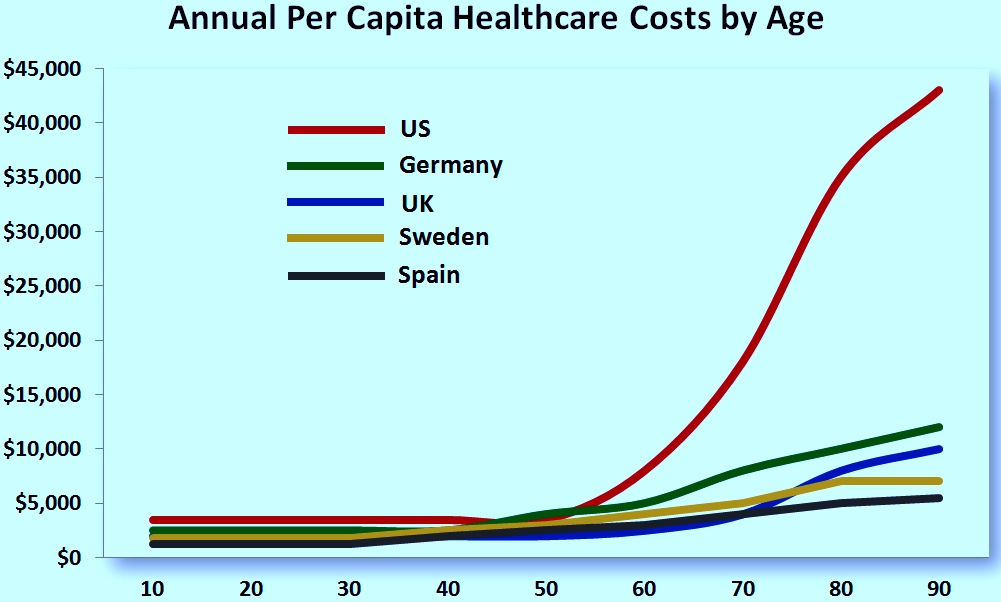 It’s not by accident that when a person’s independence, self-confidence, and bank account, are assaulted by bodily failure, they are also assaulted by the very people he or she turns to for help. It serves doctors well for their patients to regard themselves as beaten, helpless, compliant, ignorant, out of their league, and dependent upon their betters, because such patients will accept rudeness, arrogance, and substandard care as just the way things are, and pay their bills without complaint. I know from experience that it gets ever harder to fight the system when your days are filled with pain, you’re unable to work, your mind is increasingly befuddled by drugs, and your life savings are being poured into the pockets of people who don’t need them. My greatest problem with every serious health problem I’ve ever had wasn’t the problem itself, but my impotent rage at my supposed caregivers. Considering that I’ve been through, that’s quite a statement, but the truth of the matter is that an injury or an illness isn’t rude, pompous, greedy, or callous, and it won’t betray me for money.

As bad as it sounds, the truth of the matter is that every time I hear of some mass murderer shooting shoppers, theatergoers, or school children, I wish the dead had been doctors because their greed has put blood on their hands, and their callousness constitutes a betrayal of their medical oath. According to the first-person accounts I’ve read, even doctors come to hate doctors when they are ones who have a severe enough problem that they’re able to get an outsider’s view of what a nightmare it is to profoundly need someone only to find that his or her main concern is with running up a bill. Yet, the situation wasn’t always this bad. $5 to $10 for an unhurried doctor’s appointment might have represented a lot of money when I was a young man making a buck-ninety an hour (30-cents above minimum wage at the time), but it was nowhere close to the $350 quickies that I’ve been paying for recently. Specialists in America make twice as much**** as general practice doctors. They also look down upon them nearly as much as they look down upon their patients, and they dump as much of the low paying work on them as possible. This is why most of my complaints are about specialists. They are to other doctors what a rabid wolf is to a Pekingese.

For reasons that completely escape me, when the already exorbitant and ever-exploding costs of medical care are discussed, doctors rarely receive any of the blame. Liberals blame Big Pharma and Big Insurance (“The U.S. spent the most on insurance…$606 per person, compared to $277 in France and $266 in Switzerland, the next-highest countries.”*****); conservatives think that everyone should make all the money possible by any means possible so that some of their wealth will trickle down to the little people (meaning leprechauns, I suppose); and doctors are perpetually rated by both groups as belonging to the most respected of professions. What the hell is there to respect?

Call me a damn fool (it wouldn’t be the first time), but I think we need universal medical care or, at the very least, price controls. If the government has an obligation to cap what the utility industry can charge for an essential service, surely it has an equal obligation to control the medical industry, but to do so, it must rid itself of the notion that those who can't afford the cost have no more of a moral right to healthcare than Donald Trump has to another  mansion.

Healthcare Costs in the U.S. compared to other countries: http://www.pbs.org/newshour/rundown/2012/10/health-costs-how-the-us-compares-with-other-countries.html
Posted by Snowbrush 24 comments:

Labels: American medical care, American medicine is all about the money, doctor callousness, statistics on what doctors charge, the cost of seeing a doctor
Newer Posts Older Posts Home
Subscribe to: Posts (Atom)