A check-in based upon today's letter to my friend, Bernard


I am 5'10" and my weight fluctuates from 168 to 180, often within weeks. Peggy says I look dumpy at 180, plus I need to keep my weight down because of knee pain, but it's hard to do. Part of the problem is narcotics in that they tend to make a fellow hungry and they also make it harder to pass stools. As for drinking, since I live with chronic pain and not a little depression, it's increasingly hard to stay away from liquor because it at least gives me a little respite from what I would sometimes call intense misery. Yet, as I'm sure you know, a person isn't supposed to drink and take antidepressants (not to mention narcotics, sleeping pills, and nerve pain pills), so I worry a good bit about my health, and I feel guilty knowing that such things that very well cause me to die prematurely, leaving Peggy on her own.

Your book about the Holocaust has arrived--thank you. I can't imagine a man making his career writing about senseless brutality, but it's good from a historical standpoint that he does. While browsing genealogy books at the public library recently, I saw one entitled My Grandfather Would Have Shot Me. The grandfather in question was Amon Goetz (the camp commandant of Schindler's List fame), and the granddaughter was half black, so she might very well have been right about him shooting her. I had given no thought to the impact of notorious Nazis on their descendants, so I found the one-third of the book that I read interesting in that regard, yet I can't recommend it because I didn't like or respect its author.

I don't know how I lost her, but I once had a German blog friend who grew up in post-war Germany, and who described the men of her father's generation as sullen and angry. Indeed, what could they say except that they fought on the side of evil and lost? Given the misery they brought to the world, the depression of their descendants matters little to me. I can understand why those descendants feel as they do, but since millions upon millions of people were murdered by their fathers and grandfathers, I'll reserve my sympathy for others. The older I get and the better I understand suffering, the more compassion I have for the victims and the less for the perpetrators. Psychopaths who hunger for power--men like Putin, Trump, Kim Jong-un, and al-Assad--bring nothing but needless pain to the earth, and for what, so they can feel powerful during their few short decades of life? If I could, I would shoot them down for the mad dogs that they are, not that a quick death would be adequate justice.

I know that in writing as I do, I must also sound heartless, but is it not true that to have sympathy for evil people makes one a party to their crimes? What I have written also comes from my intense dislike of Jennifer Teegue, the author of the book I mentioned. I considered her narcissistic, a woman who could put on a good show of sympathy but who was devoid of any real feelings for anyone but herself. She wondered in the book whether there was an inheritable aspect to being the descendant of someone like Goetz, and I thought that, well, given that I see you and your maternal ascendants as being unable to feel the pain of anyone but yourselves, maybe there is.

As for the genealogy, I've been neglecting other things for it. It seems that the further I go back in time, the less interest I have, what with the number of grandparents doubling with every generation. Once I got to 32-great-great-greats, the names started running together even while, once I got to the almost useless censuses of 1840 and earlier, my ability to learn about their lives decreased. I have learned much, though. For instance, Peggy and I come from a long line of rural people, and while I knew that rural families, at least, used to be big, I had no idea how big. It's not even unusual to find people with ten kids, and, given the high childhood mortality, that's not counting the many who were born and died between censuses. I was also surprised to learn that nearly all of the ancestors I studied lived in but two counties in Mississippi (on my mother's side) and two counties in the Appalachian Mountains of Alabama (on my father's side). I should think that if, on my mother's side, I visited Choctaw or Attala County, Mississippi (or, my father's side, Dekalb or Jackson County, Alabama) every third white person would be my cousin, yet I didn't know this until the last few weeks.

I also noted that most of my ancestors were dead before my age of 68, that nearly all of them listed their occupations as "farming" or, in the case of the women, "keeping house." Few were well-educated, and most were barely literate. Some people on my side--and on Peggy's side--had a few slaves, but not enough to make them rich (some slaveholders owned hundreds of slaves). With this knowledge comes the will to believe that, if my ancestors did it, it surely couldn't have been that bad (which is how the descendants of Nazis think). I know this is silly, but that's the feeling. I also found that I had several relatives who fought on the side of the South during America's Civil War, and I was more appalled by their willingness to fight to preserve slavery as by their actual owning of slaves because I can't imagine the defense of slavery as a justification for the loss of 600,000 lives (the Civil War is still the costliest in America's history.) When I was a boy, Southerners still held "Yankees" in contempt (the South referred to the Civil War as "The War of Northern Aggression"), but I gather that Southern contempt is now based more on religion and politics than geography.
One of the treats of my study has been finding photos of long dead relatives and World War I draft registration cards that listed my ancestor's physical characteristics and contained their often childlike signatures. I also found my father's war records and a photo of one of the two merchant ships that he was on (the SS Alcoa Transport) and were sunk by U-boats. Six men died on that ship, and I so wish my father were here to talk to because I would love to know that if the Alcoa Transport was the ship he told me about on which men died for a cargo of Pabst Blue Ribbon. Unfortunately for me, World War II draft records have yet to be released, as have censuses since 1940, which means that recent history becomes harder to trace than earlier history, at least on the more reputable genealogical sites.

The reason I started studying Peggy's genealogy is that her father is still alive. For her part, Peggy cares much less about such things than I, although she was moved when I found the original custom's record of her family's 1959 return from Spain (where her father was stationed in the Air Force) on a truly beautiful Lockheed plane called a Super Constellation. Yesterday, her father told us that, while over the ocean, he looked out the window to see that one of the props had been feathered, but that he kept this information from Peggy's mother, who was morbidly afraid to fly. That's the kind of information that one could never learn without living relatives. 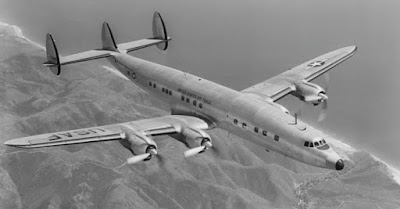 I'm sure I told you that my DNA study indicated that my ancestors were nearly all British and Irish, and that have no American Indian blood (I had thought I was at least 3/16), but a higher than average amount of Neanderthal blood and a little West African blood. I'm happy about my Neanderthal ancestors, but simply puzzled about the black ones (it sounds like rape to me, but then that could be true of my Neanderthal ancestors as well). It's a hell of world, and then we die.
Posted by Snowbrush 20 comments: