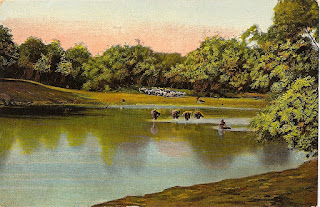 I lost at least two long-term Christian readers following the post about my decision to stop attending church (three posts back). I was sad about that, especially coming as it did right on top of my disappointment regarding the church. Then, the following sentence came into my head as I lay awake one night, “I am cast back upon myself,” and I found cheer in that, upon myself being the one place I can absolutely depend upon. Even if other people remain loyal, they can still die, and there’s only so much they can do anyway. Eventually, it all comes back to me.

While thinking about my absentee readers, I remembered that I had more to say about my decision to stop going to church. I didn’t say it sooner because I didn’t know how to express it sooner (if I had, I might not have lost my readers because what I have already said, if taken alone, seems harsh). Now that the words come to me, they flow effortlessly. It is often true that something I can’t say becomes easy to say once I get a little distance between myself and the situation that inspired it. The fact is that I went from feeling very welcome at church to doubting that I was welcome at all.

For much of the time I attended, I was in email communication with two of the women who go there, and it was with them that I shared my objection to the requirement that I say the word Christ as a prerequisite for taking communion. Neither wrote back, at all, ever, and I took that as a very bad sign. Had I continued to feel welcome, I might have continued to go to Bible study even if they hadn’t relaxed their rule about communion. As things stood, I enjoyed Bible study fairly well (shallow though it was), and I also enjoyed the people, but I needed dialogue about the communion issue, and when I immediately ran into a wall of silence, I assumed that the only way for me, as an atheist, to be accepted was to keep my mouth shut about things that bothered me, and to express a reverence for Christ that I didn’t feel. When, after I quit going, no one contacted me to say I had been missed (everyone in class had my email address), I took it to imply that I probably wasn’t missed.

During my first weeks at St. Mary’s, I felt increasingly idealistic and even optimistic due to the initial warmth and liberalism of the people, but left feeling more jaundiced than ever in regard to the merits of any kind of organized Christianity. I don’t know of anything about the Christian religion that outrages non-Christians so much as hypocrisy. I assume that Christians feel pressure to pretend to be more loving than they are, but the result is that they look worse when they fail than they would have looked had they not pretended. And, no, I am not speaking about every Christian. The only reason that I don’t hate the Christian religion more than I do is that I believe in the goodness of some of my Christian readers. That made it all the harder to lose at least two of them. I suppose they thought I was being an ass over the communion issue, but I only brought it up because I wanted to feel that I belonged and because I believed it an occasion when I had something to teach. Perhaps, the reader was right who wrote, “the Church…is not interested in learning from you. From its viewpoint, you should be learning from it.”

In any event, I deserved to have my feelings discussed even if I was in the wrong, because I shared them with people who claim that love is the virtue that they hold in highest esteem, and love does not shut people out by ignoring problems. I could, of course, have talked to more people, but having been so treated by the two who had shown the most interest in me, I saw no reason to think that any good would come from contacting those who seemed less interested, and I assumed that, even if I had, the most likely outcome would have been animosity. Silence is a very effective wall. When people are yelling, there remains the desire to be understood if not to understand, but silence just says, “Go away.”
Posted by Snowbrush 31 comments: