“Our whole life is startlingly moral. There is never an instant’s truce between virtue and vice.” -Thoreau 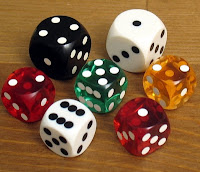 If you’re playing dice, and you throw seven 7s in a row, you might consider it remarkable, although the likelihood of throwing a 10, 2, 3, 6, 12, 4, and 9, is the same as that of throwing seven 7s. Why is it then that we remember the one and forget the other? It is because our survival as a species depends upon our ability to recognize patterns, the result being that we take advantage of some patterns (such as the seasonal changes that indicate the best time to plant); avoid other patterns (such as the increased risk of being hit by falling rocks during ice melt in high mountains); and imagine still others (as in the case of throwing seven 7s).

I felt frightened when I learned how prevalent randomness is because I took it to mean that I had less control over my destiny than I imagined. I later concluded that, whereas a realistic recognition of what is and isn’t a pattern might not make me feel as safe, it gives me more actual control. Take the case of a ballplayer who pitches a no-hitter while wearing red underwear, and concludes that his future success is more dependent upon red underwear than regular practice. Or consider those who are so enslaved by OCD that they wash their hands a certain number of times at certain intervals, weigh their food to achieve a multiple of that same number, and so on. Belief in an untruth takes energy from productive thoughts and activities and puts it into thoughts and activities that are a waste of time if not destructive.

Another error we humans often make in interpreting reality is that we limit our judgment of what causes an event to that which we either most want to be the cause or most fear to be the cause. For example, a person who is deathly afraid of cancer might interpret every ache and pain as advanced cancer, whereas another person—one who once had cancer—might believe that remission was brought about by chanting the Hare Krishna mantra 1,065 times a day.