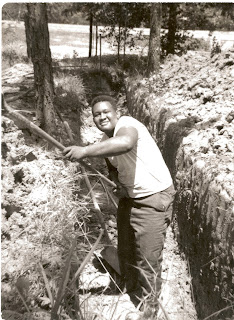 If you had grown up white in Mississippi during the 1950s and ‘60s, you  would have called them niggers too, and you wouldn’t have considered the word particularly offensive. By particularly, I mean that it wasn’t a term for politest conversation (although politicians used it in speeches), yet it was used far more than the word negro, which was more for pulpits and newspapers.

Then came the Civil Rights Movement, and I saw black people with new eyes because thousands of them were risking death to end the very kinds of discrimination that I had grown up thinking of as natural and desirable. Water fountains, for example. Everyone knew that you could get germs from drinking after niggers, so it  just made good sense for white people to have their own water fountains. When the police dogs, fire hoses, bloody faces, and burning churches started appearing regularly on TV, racism no longer seemed good or natural, yet I knew that the one thing the Klan hated more than an uppity nigger was a nigger lover, so I tried to walk the line, although I sometimes worried that I pushed the limit. For example, my best friend, Jerry Kelly, was black (he’s digging a field line for a septic system in the photo from 1966), but he didn’t come into my house; I didn’t go into his house; and we didn’t spend time together with his friends or with my friends except in certain circumstances. However, the fact that we hunted and camped together could have attracted adverse attention.

During the mid-sixties, my father and I ran a seven day a week, 115 mile per day newspaper route, and we hired Jerry to roll and throw the papers for whichever of us was driving on a particular day. Every month, we would put out envelopes for our customers to use to mail us money. Some people wouldn’t do this, so we would have to knock on their doors. One of these customers ran a country café on the east side of U.S. Hwy 51 near the little community of Norfield. One day, I pulled into its gravel parking lot, and told Jerry to go in and get our money. He looked at me in alarm, and said he would get into trouble if he went in there. I knew he would get into trouble if he tried to order, but I really didn’t know that it was unsafe for him to go in at all, so I sent him anyway. As soon as he went through that door, he was cursed and threatened, and came running back out with a woman right behind him. She told me in very colorful language to get off her property and never come back.

Three years later, Jerry joined the army. When he got leave, he visited me. He had left sweet and gentle, and come home arrogant and contemptuous. Even his voice sounded stilted, like he was choking on something. I assumed that big-city Northern blacks had taught him to hate white people, and that he had come to look down on me because, while he was off seeing the world, I had stayed right where he had left me in rural Mississippi. I never saw him again after that because it was obvious that our friendship was over.

When I entered my twenties, I wanted to have black friends because black people seemed exotic and because I wanted to know what it was like to be a black person in Mississippi, but I didn’t like any of the four black men I taught school with (I was the only white male teacher) because, like Jerry, they acted distant and superior. Right after I got the job, one of them asked me to go fishing with him, which I did. None of them ever asked me to spend time with them again, nor did they give the least indication that they wanted me to ask them to spend time with me. I assumed that the fishing invitation had been a test to determine if my presence was even tolerable. 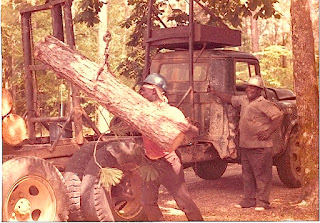 When I was in my upper twenties, I had some pulpwood hauled off my land by a black man named Horace McDaniel (on right in 1985 photo). Horace would often stop his chainsaw and drink a little whiskey. This worried me, but I didn’t consider it my place to say anything, and no harm ever came of it. Horace and I liked one another, so one day we went to a bootlegger (the county was dry), and Horace bought a bottle of the cheapest whiskey the man had. It gave me gas so bad that I thought I would explode, so I didn’t drink much of it. Horace did, and the more the drank, the more anger he expressed toward white people, so I never wanted to see him after that. When every effort I made to be friends with a black man ended with him dumping his anger onto me, I gave up on being friends with black people. Here in Oregon, I can go for days and not even see a black person, and most of the ones I do see are on the local news or sports, a surprisingly large number of them for committing violent crimes. Does pointing this out make me a bigot?

I’ve seen prejudice from both sides. I’ve been, if not always the oppressor, a member of the oppressor race, and I’ve been a member of two oppressed groups. I’ve been a white Southerner living among Yankees; and I’ve been an atheist in a world where 95% of the population believes in God, and most of that 95% hate atheists. Now I’m starting to learn how it feels to be growing old in a society that has no respect for old people.

I never feel affection toward anyone but what I wonder if they’re going to turn on me me once they learn I’m an atheist. This is how being an atheist is like being a homosexual. A black person can’t usually hide his race, or an old person his age, but most homosexuals can hide their homosexuality, and all atheists can hide their atheism. Some of us simply refuse to do so because if we’re going to be hated, we want to find out right away. Some atheists even walk around in t-shirts or caps with ATHEIST on them. I don’t do that because I don’t want to take the heat, and because I dislike clothes that promote causes.

When those black men tried to talk to me, I didn’t realize that they were giving me what I asked for, which was a knowledge of what it meant to be black in white-run Mississippi. They were simply doing so in a way that was raw and bleeding rather than polite and intellectual. I had encouraged their trust only to throw salt in their wounds when I got it. When, in my post before last, I gave various reasons for going to a church Bible class, and some of you still asked why I was going, I wondered if you sensed more to my motivations than I was aware of, so I gave the matter some thought, and I came up with a couple of things. One of them is that, just maybe, I’m like those black men in that I seek healing, but in my case from the harm that religion has done in my life. I can’t accomplish this on my own, and I can’t do it in the company of other atheists. I also know that I can’t do it in 99% of churches because they have nothing to offer me beyond what they immodestly call God’s plan for salvation, and trying to sell a mansion in heaven to an atheist like trying to sell a mansion on earth to a wildcat.

What I didn’t realize with those black men, and what very few Christians will realize with me, is that no one is in a better position to help the oppressed than those who represent the oppressor because only they can contradict his hurt simply by caring and listening. Those among my Bible study classmates who are mature will understand this, and if none do, it won’t be any less than I expected. Besides, I really don’t think there’s anything that can be done. I just know that I, like a lot of atheists, live with a pervasive hatred for religion, and that this hatred hurts. Even if something is evil, as I think religion usually is, hating it doesn’t help a person to fight it any better.