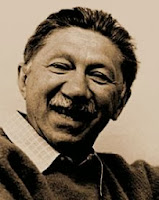 I envy Abraham Maslow in that he was a born skeptic who--unlike myself--escaped having to struggle with religion. He wrote that, when he was a child, his mother tried to control him by threatening him with God’s wrath if he disobeyed her:

Despite my slow start, I reached the same place as Maslow, that of an atheist who has retained an adoration of The Sacred, although it’s a term that I tend to avoid lest I be misunderstood.

“The first operation I ever saw—I remember it well—was almost paradigmatic in its efforts to desacrilize; that is to remove the sense of awe, privacy, fear, and shyness before the sacred and the forbidden, and of humility before the tremendous and the like.

“A woman’s cancerous breast was to be amputated with an electrical scapel. It cuts by burning to prevent metastasis. The surgeon made carelessly cool and casual remarks about the patterns of the cutting, paying no attention to the [freshman] medical students rushing out in distress. Finally, he cut off the breast, tossing this object through the air onto a marble counter where it landed with a plop.

“I have remembered that plop for thirty years. It had changed from a sacred object into a lump of fat, garbage, to be tossed into a pail. There were, of course, no prayers, no rituals or ceremonies of any kind, as there most certainly would be in most preliterate societies…Here, this was handled in a purely technological fashion: the expert was emotionless, cool, calm, with even a slight tinge of swagger.”*


Theists tend to dehumanize atheists by viewing them as being like Maslow’s surgeon, and once people have been so dehumanized, they can be dismissed as having no rights and no claim to respect, understanding, or compassion. This is the thing I object to most about theists. They commonly regard me as being shallow, missing the point, having no depth, and the like based entirely upon the fact that I don’t believe in whatever it is that they call God. By not seeing me as I am, they regard me as having nothing to teach them. I am, in their eyes, what that amputated breast was in the eyes of the surgeon.

*Maslow quotes from The Right to be Human by Edward Hoffman.
Posted by Snowbrush 15 comments: