I have often thought that I would like to have a home altar, but two things work against it. One is that I have never been able to clarify what its purpose would be. The other is that I am a decorative minimalist. Things, even things I treasure, weigh on me. If you are possessed of a collector mentality, you will not understand this. Peggy does not understand this because even Peggy—who could not tell you if Barack Obama is a Democrat or a Republican, and who holds religion in the same low esteem that she holds politics—has a shrine in her room. She didn’t build it to be a shrine but, for reasons unknown even to her, she calls it her “Rabbit Shrine.” 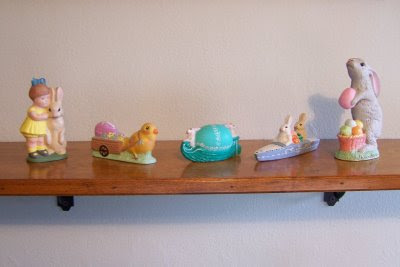 I too have a rabbit, three in fact. Two are stuffed ones from childhood Easter baskets, and one of those still bears the stitches sewn by my mother after my dog made a determined effort to disembowel it. The third is in the form of a thirty-five cent candle that I saw in a junk shop while on a long drive through the countryside. 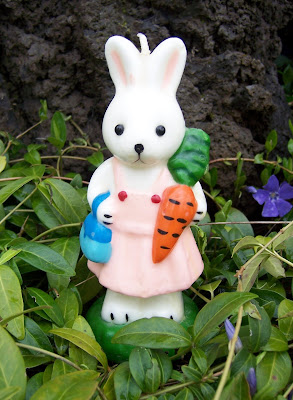 My attraction was instant and intense. I felt as if I had known Miss Bunny all my life but, as I said, I am not a collector. Because I am not a collector, I did not buy her that day, and so I had to drive over a hundred miles to buy her the next day. I mentioned that the store was a junk store, but I failed to say that it was, by country standards, a large and extremely junky junk store, and I misremembered what part of the store Miss Bunny was in. Luckily, I arrived six hours before closing.

It was some time before I could even theorize about why I felt that I had always known Miss Bunny. The bunny in the Little Golden Book that I got for my fifth birthday in 1954 is obviously a very different bunny, but you will also note the similarities. 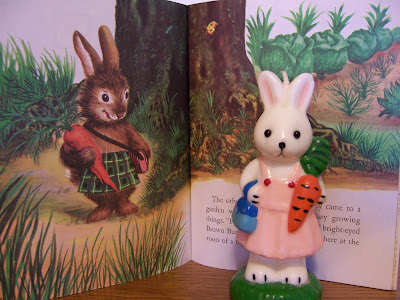 Eugene has many stores that sell gods and goddesses (“idols made by hands” as I once called them) for home altars, but I feel no special affinity for any of them. I sometimes wish I did, but I don’t. People once thought they represented real entities—and some still do—but they are not real to me. They are often interesting, and sometimes beautiful, but they are not real; they do not demand my obeisance from across ten blocks much less a hundred miles. Even though Miss Bunny spends most of her life in the hall closet, she is still my chief goddess because she puts me in touch with the innocence and gentleness that lives within me, and that I have often tried to bury beneath a manly floor of concrete.

Here is another of my deities. 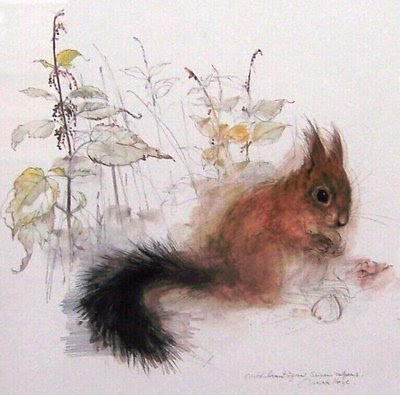 I wrote the following on the day I bought her:

I saw the print at the 5th Street Market a couple of months ago and fell in love with it but didn't want to pay $55. It was still there yesterday, so I got it for $25! Yippee! It reminds me of Peggy when she’s asleep, and of a storybook character from my childhood, and of a part of myself that few are allowed to see—the part that is vulnerable and innocent. I see many art objects that I like, but few that I love enough to bring home and look at everyday for years. I am absolutely ecstatic.

I can scarcely believe that 22 years have passed since I bought my squirrel. If I survive another 22 years, I will be 82. Peggy asked this morning if I ever think about how near death I am, even at best. Yes, all the time. The old tell the young that they too will someday realize how fleeting life is, but the young never quite believe them. It is not just my death that I grieve but the fate of all those things—like my bunnies—that I cherish and that no one else would be likely to appreciate. Then again, I own a jar of sand. 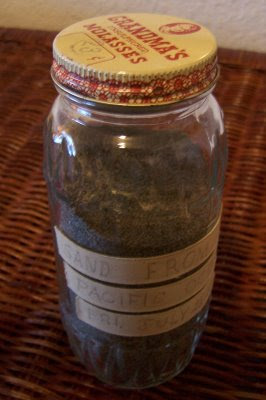 And this is what I wrote in my journal the day I bought it:

We went to an estate sale where I found a molasses jar full of sand that someone had collected on a long ago vacation. I didn’t want it, but worried that no one else would either, and that it would end up in a landfill. I went back the last day of the sale hoping it wouldn’t be there, but it was, and I paid twelve cents for it. Someone had treasured it for decades, and I felt that I validated the good in them by preserving it.

Maybe someday I will have an altar. I will place upon it my storybook, my candle, my squirrel print, a vase of yellow daffodils, my molasses jar filled with sand, a picture of Peggy, and maybe one of me when I was a child. What else…I’ve always liked the painting of Jesus knocking at the door….

You see, it’s easier to start than to know when to stop. Even if I just limited myself to those symbols with which I resonate most powerfully, I could fill a room. But since I am a decorative minimalist, all those things would feel like a heavy weight on my chest, and I would eventually have to get rid of them. A prayer just entered my mind:

God preserve me,
“Why, my child?”
Because despite my failures,
I am worthy.
Posted by Snowbrush 32 comments: