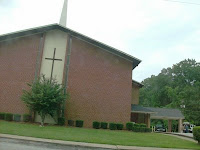 Being a Southern Baptist in Mississippi is about as original as having brown hair. Growing up—as I did—in the Church of Christ meant something, but I never could see that growing up Baptist meant anything. It was supposed to be a religion, but Baptist kids didn't seem religious. They didn’t talk about their church; they knew little about the Bible; they didn’t make an effort to hangout with other kids who were Baptist. My assumption was that the Baptist religion was utterly boring and utterly irrelevant to anything in the real world.

As an adolescent, I was so into religion that I literally visited every denomination I could find, yet I didn’t set foot inside a Baptist Church until I married Peggy and attended with her parents a few times. Those visits confirmed my low opinion of the Baptist faith. On the surface, it was much like the Church of Christ, the biggest difference being that the Church of Christ didn’t have instrumental music; but at a deeper level, it seemed as if no one wanted to be there. They didn’t smile; they weren’t friendly. It was as if they were performing a strange kind of penance, the terms of which forbade their religion from ever containing the least thing of the least beauty to the least person for the least amount of time.

None of this made me hate Baptists. It just kept me from taking them seriously. I did observe however that Peggy’s parents and Peggy’s older sister and her family were really into the Baptist Church. The core of their faith, as near as I could understand it, was that rule number one was that you tithe, and rules number two and three were the same as rule number one. The Church of Christ stayed quiet on the subject of tithing, so this was the second obvious difference that I observed, and it made me damn glad that I hadn't grown up Baptist because my family was poor enough already.

From time to time, I talked with Peggy’s father and her sister about tithing. Her father said that you only had to do it with the money that was left over after taxes, and that you could spend the rest of your income as you pleased. I thought this sounded like the kind of Pharisaical legalism that Jesus hated, but I didn’t say anything. The sister added to my knowledge considerably by pointing to a verse in the Bible that says that however much you give to God that God will give a lot more back to you. The sister made no bones about it, she wanted to be rich, and she believed that if her family did right by God, that God would do right by her family by making them all wealthy.

Well, this was interesting. At least, it explained why all those poor Baptists kept pouring money into the coffers of preachers who could afford a lot of things that the rank and file could not. I guess it was easier for them to stomach the preacher driving a Cadillac if they believed that God had scheduled their own Cadillacs for future delivery.

Being a man who wasn’t apt to put $10 into a church plate much less 10%, I had to give Peggy’s family credit for acting on their faith. That said, some things bothered me; they bothered me a lot. For one thing, Peggy’s family was materialistic to a degree that I had never encountered in my personal relationships. I kept wondering where they would find space for even one more gee-gaw, but they always did. There were other things too. For example, Peggy’s sister’s cats kept having kittens all over the place because, as Peggy’s sister said, she couldn’t afford to have them neutered. Yet, she could afford to put hundreds of dollars a month into the church plate. I concluded from this and other questionable behaviors that maybe tithing was a little too important to Baptists. Maybe the preachers had drilled it into them to the point that they figured it was pretty much all they had to do to please God, God being more or less like an investment banker.

Last summer, Peggy’s mother’s preacher flaked out on preaching her funeral. He didn’t have a good reason, and he didn’t even bother to tell Peggy’s father. Instead, he had his wife call Peggy’s aunt the day before the funeral and ask her to pass the word along. A Disciple of Christ minister who didn’t know Peggy’s mother ended up preaching the funeral. I returned home livid. I got the names of everyone on every rung in the ladder of the Southern Baptist hierarchy, and I wrote to all of them. That was last August, and I’m still waiting to hear back. Do you think I don’t hate the Baptist Church? I’m sixty years old, and I grew up surrounded by its warehouse-like buildings with the teeny-tiny steeples that looked like so many puny pricks, yet I can’t think of one good thing to say about it. Even shit goes to the trouble to stink; the Baptist Church just lies there odorless, awaiting delivery of its Cadillacs.
Posted by Snowbrush 53 comments: