One Man’s Road to Atheism

To my regular readers, some of the following will be familiar. Most will not.

I grew-up in an ultra-fundamentalist denomination named the Churches of Christ (people shorten it to Church of Christ). The women in my congregation weren’t allowed to teach Sunday school, and the men didn’t want to, so the preacher, Brother Miller, held a Saturday morning Bible study. That was where I first questioned God’s compassion and integrity at age eleven after learning that he had ordered the Israeli army to repeatedly commit rape, genocide, and the senseless slaughter of pets and livestock (in Numbers 31:17-18, for example).

I afterwards spent years praying for guidance so that I might reconcile Biblical passages in which God is described as petty, jealous, violent, and vengeful, with passages in which he is portrayed as loving, generous, peaceful, and forgiving. I mostly did this by praying for guidance and then pointing to a Bible verse at random hoping for a message. When my finger consistently landed upon unhelpful verses, I concluded that God was mocking me, and I lost all trust in him, although I lived in such fear of hell that I did my best to deny it.

When I was twelve, I was running my paper route when I told God that I shouldn’t have been surprised that he abandoned me given that he had abandoned his own son (Matthew 27:46). Within moments, I concluded that I might have committed the unpardonable sin (Matthew 12:31-32). Years passed during which I was desperate for reassurance but too ashamed to tell anyone what I had done.

My fear of hell only abated in my twenties when I concluded that God didn’t exist. Unfortunately, my emotional need to believe in him continued because I had been told since infancy that a life without God is meaningless. While I found it easy to jettison the Church of Christ’s other beliefs, this one stayed with me. But I’m going to go back a bit...

When the events of which I am about to speak occurred, I was a rural Mississippi teenager who, through no choice of my own, was becoming the sole liberal in an area network of Churches of Christ. I initially kept my liberalism to myself as I preached short sermons, led prayers, presided over the weekly communion table, traveled with preachers to out of state revivals, and otherwise presented myself as a minister-to-be. Unknown to others, I was also struggling to believe that God existed and that he was good.

I couldn’t tell anyone about my doubts because the Church of Christ maintains that non-belief is a very serious sin (if not the unpardonable sin). If I had confessed to it, I would have been expected to move beyond it quickly, yet I had already failed in that. This meant that I would lose lifelong friends and be shut-out of an institution that was  central to my existence. Along with the problems already mentioned, my faith in God also suffered for other reasons.

For instance, year after year and in sermon after sermon, I heard preachers tell of “countless Christian boys” who became drunkards or suicides after attending “liberal Northern universities” where their faith was destroyed by atheists, liberals, Communists, secular humanists, and Godless professors. When it came to condemning the sinners in their own congregations, preachers were reticent. Indeed, they often praised them for being the kind of people God prefers in that their relative poverty and ignorance supposedly makes them aware of their need for him, unlike the “educated fools of Northern universities” who are “puffed-up with conceit and trust in their own understanding rather than in God.” (Matthew 11:25; I Corinthians 1:27).

The more I heard faraway secularists criticized, the more my interest in them grew because I was desperate to talk to someone who could understand the reasons for my doubts. Unfortunately, I didn’t know a single nonbeliever, so when I finally did choose a confidant, that person was a young Church of Christ preacher from another part of the state. As it turned-out, listening to sincere doubts was not his forte, so he quickly interrupted: “I’m not going to sit here and listen to you blaspheme my Jesus, and if you keep doing it, I’ll have to ask you to leave.” My fear of such a scenario was what had kept me silent for years, so I knew that if I ever confided in anyone else, that person would be a nonbeliever. I had no idea what he or she might say, but at least it wouldn’t be the dismissive bromide that ministerial students were fond of repeating to people who interpreted a Bible verse differently than they did: “God said it; I believe it; that settles it.” 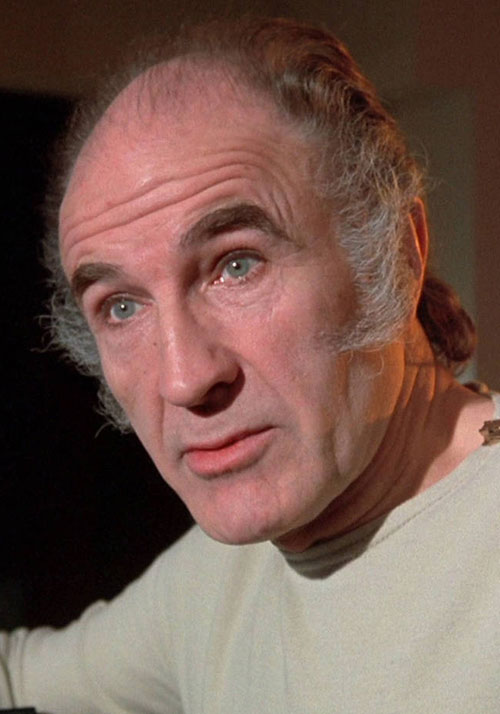 Because I so longed to meet a Northern infidel, I got to wondering if it would be possible to recognize one on sight. I finally settled upon the image of a white male who was blunt, balding, intellectually intense, worked in a suit, spoke with an upper Midwestern accent, and had no patience with sloppy reasoning (when The Fugitive TV show aired in the mid-sixties, I found my man in Lt. Gerard—see photo). However, I was much more interested in liberalizing the Church of Christ than in abandoning it, and was naive enough to imagine that I could. In fact, the truth seemed so obvious to me that I was certain that it would be obvious to anyone once I pointed it out.

So it was that during my last year of high school (1966-67), I wrote liberalizing articles for my congregational newsletter in order to convince its readers to adopt a kindlier version of God. What follows is an encapsulation of those articles, none of which were published.

I told my “brothers and sisters” that a loving deity would find it impossible to condemn people to eternal hell simply because they didn’t belong to a particular church. This statement wouldn’t raise an eyebrow in many denominations, but the Church of Christ doesn’t regard itself as a denomination but as, “…the one true church to which God will send anyone who sincerely seeks him, even if that person is blind, illiterate, impoverished, never heard of Jesus Christ, and lives in Communist Siberia.”

“If it is true that God sends all sincere seekers to us,” I continued, “why is it that everyone in our congregation was either born into the Church of Christ or married into it? What could be more obvious than the fallacy of this teaching unless it’s the fallacy of teaching that the Church of Christ has existed continuously for 2,000 years with its doctrines intact when the truth of the matter is that our doctrines aren’t even intact today. For example, our congregation uses lots of tiny glasses for communion while a nearby congregation uses a single large glass (I Corinthians 11:25), and they say we’re going to hell because we deny the obvious truth of God’s way.

“There’s the question of whether women should be allowed to speak in church, even to make announcements or lead Sunday school classes. Our congregation allows neither, and we say that those who do are going to hell (I Corinthians 14:34). Then there’s our prohibition of instrumental music simply because it’s not mentioned in the New Testament. Again, we claim that every every person over the age of accountability (around age 12) who attends a church that has a piano is going to hell.”

When my submissions were ignored, I concluded that my presence was no longer wanted, so I started attending a nearby Episcopal Church where the people were as appalled as I by Church of Christ doctrine. Right up until my articles were ignored, I had loved my church, and I had believed its people loved me. I had even tried to believe that God loved me, but that had proven increasingly difficult given my growing doubts and my early memories of hiding under the bed to escape God’s wrath. I could see myself in the Old Testament story of a man whom God had killed for making a single mistake despite that man’s sincerity in serving God (II Samuel 6:6-7). I concluded that such a God is worse than Satan because at least Satan doesn’t falsely claim to love anyone.

Then there was the question of why Christ acts like an insane boyfriend who says he will kill us if we don’t love him, but, unlike an insane boyfriend, will know if we pretend. The angels supposedly love him, so how is it, then, that one-third of them followed Lucifer into rebellion? Given that God needs our love, shouldn’t he at least make it easier to give? Christ complained of the Pharisees: “They crush people with unbearable religious demands and never lift a finger to ease the burden,” (Matthew 23:4), yet God had treated me similarly.

I was attracted to my local Episcopal Church for its beautiful sanctuary, its lovely rituals, its kindly deity, and its priest who I adored, yet by the time I joined, I had come so far down the road to non-belief that when Father Hale left and I distrusted his replacement, my doubts came roaring back. For example, why, if God is so good, is life so hard? Why would a perfect God author a book filled with inaccuracies, contradictions, and absurdities? And how can anyone seriously examine the basis for his or her beliefs yet remain a believer?

I could go on writing, but after many weeks and dozens of hours spent regurgitating painful memories, I am ready to be done now. This has been a hard post to write, and I don’t even know why I wrote it.