The truth about Fort Rock 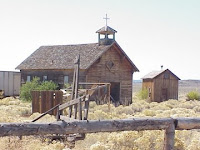 Only one of the Fort Rock homesteaders is alive for the annual reunion this year. Her name is Vivian Stratton, and she was nine when her family moved to the valley in 1913. Almost overnight, sixteen towns appeared, and the number of homesteaders exceeded 2,500. Many were from back East, some from Europe. All were drawn by the promise of free land in an area with rich soil, plenty of water, and a soon to be built railroad. They read of rich black loam that would grow sixty bushels of wheat per acre along with,

“…all varieties of fruit such as apples, pears, plums, cherries, and all other kinds of berries,” of, “…good fields of grain waving to and fro…good level land…many miles of lanes with well-tilled fields on either side, good houses and barns…”

The truth was that the Fort Rock Valley averages eight inches of rain and 345 days of frost annually—and it still doesn’t have a railroad. It doesn’t even have rivers for irrigation. Realtors made money showing the land to homesteaders, lawyers made money filing their claims, railroads made money moving them, teamsters made money transporting their belongings from the railhead, and merchants made money selling them supplies; all while local ranchers watched and laughed.

Many of the homesteaders suspected the worst, but by then they were thousands of miles from home and lacked the money to return. Louise Godon, the fourteen-year-old daughter of a French father and an Irish mother wrote of her mother Bridget’s reaction.

“At the sight of it all, Mother burst into tears. My how the tears flowed! Mom remembered back to her lovely home in Philadelphia—the maple-lined streets, the neat lawns, front and back, of the solidly built house. She remembered her collection of fine china, glassware, and silverware, which we had sold—in fact, nearly given away—just for this God-forsaken land. And she cried some more.”

Crop after crop was blown away, and what the winds missed, the rabbits took. If a family moved before five years passed, or if they failed to make certain improvements, their land was forfeited, so fathers looked for work in other places—often in other states—while wives and children hung on, hoping that next year would be better. As it turned out, the weather had been milder than average early on, and took a turn for the worse in the 1920s. As quickly as they had come, the homesteaders moved away, leaving the laughing ranchers to pay their taxes and swallow up their acreage. Of the many towns, only Fort Rock remains, and it with a population of 25.

Ironically, Bridget Godon was one of the handful who stuck it out. When her husband died of a stroke at age 54, she and her five daughters stayed on to raise cattle, work the land, and earn money in every other honest way they could. When they lost their savings in the bank failure of 1927, they started saving again. They grew wealthier, and when other homesteaders left, they took title to still more land. From 320 acres, their holdings grew to over 5,000. One of the daughters, Alice, was mechanically gifted, so she repaired the machinery and learned to drive. The matriarch, Bridget, died at age 93.

No landscape touches me so deeply as the desert. I look upon it with unrelenting wonder that anyplace can be so beautiful. Like Bridget Godon, I cry and cry but for a different reason.

I suggested to Peggy that we buy a cabin in the desert for vacationing, but she wouldn’t consider it. She admits that the desert is pretty, but she objects to the wind and the dust, to the winters that are too cold and the summers that are too hot. She complains that there is no shade, and she laments the skin-cracking aridity and the extreme isolation. In all of this, she is right, yet for me the desert’s beauty outweighs them all. The stark nakedness of the air, the sky that never ends, the clarity of mountains a hundred miles distant, the smell of dust mixed with juniper and sage after a storm…other landscapes are trivialized by comparison.

I know that the forest and seashore are equally a part of nature, and that they are equally beautiful in their own way, yet they do not cause me to kneel in awe. When I come home from the desert, I feel as if I have come home from a dreamscape. I know it exists, and that I saw it, yet it seems unreal. But then I loved deserts long before I ever saw one. When I finally did visit the Southwest, it was one of the few times when my expectation was inferior to reality.

It might seem ironic then that I feel happier now that I am home. I can best compare the two environments to being tickled. When I was a boy, my cousins would tickle me until I couldn’t breathe. The desert is that way. I try to cope, but the feelings keep growing even while I keep diminishing.

When I first took LSD, the woman who gave it to me warned that it would take over my mind, and that if I tried to resist, it would turn my energy against me. Likewise, it is in the desert that I touch the infinite, and the infinite takes possession. I see my nothingness, and I struggle to find that person who I call myself, that person who normally looms larger in my awareness than the rest of the world together; but all that I have to throw against the power of the desert is exactly equal to nothing. I am less than an ant before a twenty-ton truck. I am not only run over by the desert; the desert is oblivious to what it has done. It holds the truth of my insignificance hard against my face, and in doing this it comforts me. It says to me that I am worth so little that there is really no reason for me to fret about anything.