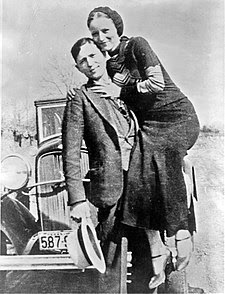 Recent reading. Lots of books. Always lots of books. One about an elderly couple who were the first to walk across the Gobi Desert. Another by a shrink about his childhood. A third by a woman with breast cancer. A fourth by a druggie about his misadventures. Several about alternative medicine. Most notably, a scholarly work about Bonnie and Clyde. Scholarly…Bonnie and Clyde? Sounds oxymoronic, but the author made them and their era his life’s work.

My father was born in 1909, the year before Clyde Barrow. He said he saw Clyde in a bar once, and maybe he did since they covered the same territory and both did their share of bar hopping. Dad also said that the 1930s was his favorite decade. Only when I became old enough to envision the Great Depression did I catch the irony. But he was a young man then. He worked as a carpenter, painter, and merchant seaman. He rode freights, ran bootleg, lived with a lot of women, and got into a lot of fights. He used to show me where the honky tonks stood, and tell me about the people he fought in them. He seemed nostalgic. “Dad, did you like fighting?” “Yeah, I always enjoyed it.” He got into his last fight when he was 75 (he attacked two highway patrolmen with his walking stick), although he did get mad at me one day when he was 84, and go skulking about the house for a while with a butcher knife.

I used to watch The Untouchables on TV. It was mostly set in the ‘20s but some of it in the ‘30s, and it didn’t take much to envision my father back then. I had pictures of him in cocky poses wearing the same kind of clothes and standing by the same kind of cars. When the movie about Bonnie and Clyde came out in 1967, I took Dad to see it. It was one of only two movies that we watched together. Dad thought Bonnie and Clyde got a raw deal. A lot of people did, which was probably why 20,000 people attended Bonnie’s funeral. Everyone hated banks during the Depression, so there was a lot of sympathy for people who robbed them. When Dillinger was killed on a Chicago street, bystanders thronged to dip their handkerchiefs in his blood.

The real life Bonnie and Clyde were even more violent than the movie versions and died even younger. Bonnie was 23; Clyde was 24. Last night, I read about their Joplin, Missouri, shootout. Two cops were killed and three outlaws wounded. The account got to me, especially the part about the dog Snowball that ran away while the machine guns rattled. It wouldn’t have hit me so hard if what had happened in the weeks before the shootout hadn’t been so ordinary and even light-hearted. The movie was that way too. It wasn’t just the graphic violence that gave the censors fits, it was the interweaving of violence with humor and tenderness. But that’s how Bonnie and Clyde lived; to some extent, it’s how we all live, only instead of being dropped by gunfire, we die from cancer and car crashes.

Peggy objects to any attempt to humanize criminals. She doesn’t want to know that Clyde liked hot chocolate with marshmallows, or that Blanche enjoyed putting together puzzles, or that Bonnie wrote poetry, or that Buck taught Snowball to stand up in the back seat of the car and put her paws on his shoulders, or that W.D. joined the gang because he was a kid in need of a family. I’m mostly that way too, but it’s easier, somehow, to humanize the outlaws of old than the ones who just knocked over the local Dairy Mart.

Is it better to be like Peggy and not even try to see the good in bad people? I guess that depends upon what you want to do with them. If you want to hang them from the nearest tree, it’s probably better to dismiss them as monsters. But if you want to think of them as people who might, in different circumstances, have done a lot of good with their lives, it probably isn’t. I don’t know which way is right. Are we too soft on criminals or too severe? I mostly think we are too soft, but I also think that the biggest difference between good people and bad people is how they were brought up. Without Peggy’s softening influence, I would have been capable of some bad things, but that wouldn’t mean there was no good in me. Even Hitler was kind to his dogs. What I see in such behavior is something akin to a seed that might have blossomed into a beautiful flower under different circumstances. We are all born with the capacity for good.

I awakened despondent at 3:00 a.m. last night, so overcome was I by the tragedy of Bonnie and Clyde, and their victims. It’s as if all that suffering and waste had formed into a dense black ball and lay heavy on my chest. I mostly thought about their many months on the run, and I reflected upon what it must be like to never eat in peace or lie down without wondering if you will be awakened by someone shooting at you. The following is from the report of the posse that killed them. It’s one of the reasons why my father hated cops so terrifically that he said any day a cop was killed was a happy day for him.

“Each of us six officers had a shotgun and an automatic rifle and pistols. We opened fire with the automatic rifles. They were emptied before the car got even with us. Then we used shotguns ... There was smoke coming from the car, and it looked like it was on fire. After shooting the shotguns, we emptied the pistols at the car, which had passed us and ran into a ditch about 50 yards on down the road. It almost turned over. We kept shooting at the car even after it stopped. We weren’t taking any chances.”
Posted by Snowbrush 4 comments: