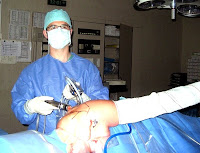 Surgeons rarely kill people. They might screw them up, but they don’t normally leave them dead as a doornail on the operating table. Anesthesiologists are more likely to do that. How weird is it then that people choose their surgeons but take whichever anesthesiologist walks through the door? I made a big deal today of requesting the same anesthesiologist I had in March. I liked how he dealt with my sleep apnea, and he and Mark (my surgeon) obviously liked one another.

This brings me to another thing to ponder when you’re having surgery. You want to do what little you can to insure that your surgical team works well together because a successful surgery is never a one man affair. This is why I didn’t ask Mark to operate at my usual hospital—the big one where Peggy works—even though Peggy wanted me to. Better for me to be in a strange environment than for him to be in a strange environment.

I went both to the hospital and to Mark’s office for my pre-op today. The lady at the hospital smiled when she said I wouldn’t “have to be stuck” for blood tests. I said I wanted to be stuck, so she stuck me. The negative results were welcome after all these months of heavy medications.

The lady at Mark’s office said he would be in shortly to talk to me about my upcoming shoulder replacement. “I’m not having a shoulder replacement,” I said. “I’m having arthroscopic surgery on my left rotator cuff, which is to include an acromioplasty, a bursectomy, a supraspinatus repair, a glenohumeral joint debridement, articular cartilage restoration, and a few other odds and ends, but no shoulder replacement.” “Since the surgery on your right shoulder went so badly, he wants to go ahead and replace your left one at the outset,” she said. Peggy and I looked at one another. When Mark came in, he said there had been a mix-up.

If I didn’t trust him, I would have needed an explanation, but a good patient needs a good doctor more than a good doctor needs a good patient so I don’t rock the boat unless it matters. Besides, we had a lot to talk about. Like the following, which I wrote for him and will condense for you. It might not look like much, but it contains considerable learning, some of which might be of benefit to you someday.

“Sleeping in a chair while in pain was a major problem last time (I was in that chair for four months), and I fear it will be this time too.

“I’ve learned that a good sleeping pill is often preferable to a narcotic because it: (1) enables me to get to sleep sitting in a chair, (2) enables me to stay asleep through a surprising amount of pain, (3) lasts twice as long, and (4) doesn’t make me itch. I would therefore like to rely on sleeping pills more and narcotics less. The Restoril you prescribed works well, but one can develop a tolerance in ten days, so I did some research and came up with Dalmane as a reasonable companion.

“Ron at Peace Health Pharmacy agreed that Dalmane is my “best bet” as a companion to the Restoril, and added that it has the advantage of being stronger and longer acting. I also have some Ambien on hand, but he confirmed my observation that it isn’t all that strong and wears off quickly. My insurance requires prior authorization for Ambien CR, but I have a coupon for a four-night sample if you see fit to authorize it. I also have a coupon for a week’s worth of Lunesta—which is also a wuss drug compared to Restoril and Dalmane.

“So, here is what I would request.

“A painkiller. Maybe more Demerol, since it’s the only narcotic that doesn’t make me itch.

“Dalmane (flurazepam hydrochloride). 30 mg is the usual dose. If you specify tablets rather than capsules, I can start with half a dose (I always prefer tablets for this reason). As with everything else, I can get three months’ worth for the price of two, so if you prescribe 90, I won’t need a second prescription.

“I’m set for Restoril and I don't need a prescription to buy all the stool softener that a person could ever want to own.”


Mark gave me what I wanted but not as much as I wanted. Sometimes, he will give me a lot of something, and other times he won’t. I can see no rhyme or reason in this, so I suspect it’s simply a matter of mood or attentiveness, but I never ask about it. These drugs are addictive, and that alone makes it impolitic to ask for bigger bottles. Just asking for a particular mood-altering drug can put a doctor on guard, yet I do it all the time because I’ve learned that I have to be my own authority to an extent. No doctor can know what works for me, and no doctor will spend one one-thousandth as much time as I will focused on what I need. In my experience, most doctors aren’t even that good at pain control. They basically have one or two favorite drugs that they give to everyone who walks through the door. Some doctors even view a patient's request for pain control as a sign of weakness or addiction. They are unworthy of their profession. People in pain need to feel empowered.

I spend so much time thinking about and reading about drugs that I even give them personalities. Vicodin? A skinny little nymph for those days when you need just a whiff of a narcotic. Norco? Vicodin’s big sister (her parents didn’t want a baby back then, and that’s why they gave her that crappy name.) Percocet? Full-figured and cuddly. Demerol? The thinking man’s drug because it makes a man sit and think—even when he would prefer to get up and do something. Ambien? When it’s 3:00 a.m., and I’m not in a lot of pain but I can’t get back to sleep either, Ambien comes like a sleepy-time angel with long white wings and a long white gown. Restoril? A fatherly hand that covers my eyes and drowns my pain in the waters of oblivion.

As I approach this latest surgery, my main comfort is that the things I’ve learned should give me a better shot at sleep and pain control even if this recovery is as bad as the one I started in March—for which I still sleep with ice packs. And, who knows—maybe it won’t be as bad. After a little vodka, I can even think of it as a grand adventure—sort of like a trip to an exotic land, only with a lot of pain and disability thrown-in at no extra charge.

But even if it is as bad, things could still be A LOT worse. Parkinson’s, Alzheimer's, kidney failure, liver cancer, complex regional pain syndrome, amyotrophic lateral sclerosis… Yes, things could be worse. I have no real complaint, but sometimes I get carried away by fear as if fear were itself a drug. I picture it as a big horse with frantic eyes and frothing lips. It keeps running faster and faster, and I struggle mightily just to stay in the saddle because to fall would be unthinkable.
Posted by Snowbrush 29 comments: