Upon cursing those who so richly deserve it 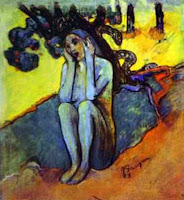 I rarely curse anyone, but have done so twice in one week. The first time was when I saw a man picking a bouquet of flowers in a public park. The second time was twenty minutes ago when I cursed Heidi, the medical office manager who lied to me last month about my insurance company and the federal government requiring her to collect mine and Peggy’s Social Security numbers (I refused to give them, so she had me pay upfront for an appointment I had waited two months for).

I can think of a few downsides to cursing people, but the one I find most influential is that, if they have the power to thwart me, they might be more likely to use it. This didn’t apply to the thief or to Heidi. As I told Heidi, I would be delighted if she didn’t refund my money because I would love to haul her lying ass into court. If there were a hell, it would almost be worth going there just to see some people I know getting what they so richly deserve. Of course, if Tertullian was right, one of the things that makes heaven heavenly is that "the saved" get to gaze into the fiery pit at souls writhing in agony.

The painting is Paul Gauguin's “Eve—Don't Listen to the Liar"
Posted by Snowbrush 21 comments: