I have given but little time to blogs lately--my own or others--because I am preparing for shoulder surgery in December on the shoulder opposite the one that had been done in the photo. After surgery, I will be limited to using one arm for three months, so I am working to get as many chores out of the way as possible. If something important occurs in your life that you want me to know about, please post it in the form of a response to my last entry.
Posted by Snowbrush 33 comments: 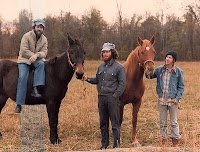