You shall not lay a stumbling block for your brother* 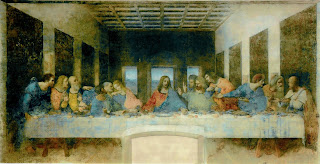 I went to two Episcopal Circle Services (an intimate and informal communion) before I realized that each person in the circle was expected to say “Christ is here” to the next person during the passing of the bread. This posed a serious problem for me, because it’s one thing to sit and listen to words with which I don’t agree  (as I had done with many of the hymns and readings), but quite another to use them. I wrote to one of the leaders of the service about my concern, and she responded:

“We’re not talking body and blood, we’re talking heart and soul... To me, Christ is not a person’s name, but a title that acknowledges a way of being in relationship with the ineffable, and the man named Jesus was really, really good at that relationship…. I hope you’ll stay.”
I took her last sentence to imply that she had said all she had to say, and that it was now up to me whether this was to be my hill to die on. I told myself, “Why not just say it? I don’t know why these people regard Christ so highly, but I like and respect them; they like, and appear to respect, me; I hunger for lasting community with different kinds of people; and I feel a need for ritual and liturgy in my life; so I’ll just use the word as a metaphor for something good.” A day later, I realized that I couldn’t bend enough to do this. If the favored word were basalt, I wouldn’t have to hunt for positive metaphors (strength, beauty, integrity, solidity, patience, and regeneration), but Christ? It’s not just the harm that has been done in that name; it’s that for every good thing he reportedly said or did, he said or did something else that was confusing, nonsensical, or appalling.

I know. The word Christ is held in highest esteem by Christians, so what could be more arrogant than for an atheist to show up at a church and object to its use? First, I don’t object to others using it. Second, the order of service states that “All are welcome.” Third, in the words of one of the priests, “the service exists, for those for whom the traditional ‘father, son, holy spirit’ language just doesn’t work.” As I see it, a group of laypeople designed Circle Service with the stated intention of total inclusivity, but then erected a barrier to everyone who doesn’t revere Jesus. While it’s true that they would be fine with me transposing the word Christ to mean light, love, harmony, or oneness, the truth is that only Christians could make such a transposition. When I think of Christ, I think of a world in which millions of non-Christians—and even Christians—have been abused, oppressed, tortured, and murdered by people who acted in his name, so to imagine that I—or any non-Christian who attaches importance to words—can take the name of the founder of the Christian religion and translate it into something worthy of reverence is fanciful.

I now eat fish, but for years I was a vegetarian. One night, a friend who knew I was a vegetarian invited me to supper, put a bowl of chicken soup before me (it was a one-dish meal), and, when I objected, said, “You can take the chicken out, can’t you?” I said nothing more about it because he was an elderly, lifelong meat eater in a rural area containing nothing but lifelong meat eaters, and I wanted to assume that he was acting out of ignorance. As often happens when I go out of my way to avoid conflict by putting a less condemnatory spin on someone’s questionable behavior, I later realized that he almost surely hadn’t been that ignorant. I concluded that he most likely saw the consumption of animals as something that normal people did, and vegetarianism as a needlessly annoying eccentricity that he wasn’t about to accommodate even when he invited a vegetarian to dinner. Likewise, I’m being invited to communion at St. Mary’s, only to find that my acceptance of the invitation requires that I say words I don’t believe—words that NO non-Christian believes. Only Moslems say “Mohammed is here,” and only Christians say “Christ is here.” The people who create the Circle Service surely realize this, or at least they would if they thought about it.

I also regard their attachment to a purposefully undefined word as an example of the slippery slope that awaits those Christians who move from literalism to liberalism. I would like to think that liberalism (which has much to recommend it) will become the dominant face of Christianity, but I don’t see it happening. I think it possible that, once a literal belief in the creeds has been discarded, most people will regard the language itself as a hollow shell. Like a Christmas ornament, it might look splendid on the outside but, too little being put in to replace what was taken out, it is empty within. A century or more ago, the Unitarian Church reduced its own God-language to the status of ornaments, but since ornaments are only useful as symbols, the further they moved from valuing what the symbols represented, the further they moved from the symbols themselves. Today, Unitarians speak sparingly, if at all, of Christ or even of God. Is this where other liberal churches are headed? One might interpret a purposefully vague and open view of Christ as a sign of higher awareness, but it could also be like the tunnel with a pinpoint of light at the end that dying people see just before all the lights go out.

*Romans 14:13. The question is, am I their brother?
Posted by Snowbrush 29 comments: