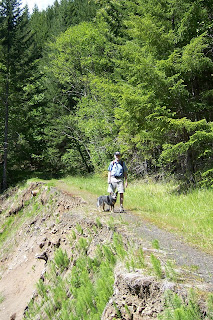 The pain has let up enough lately that Peggy and I took a two-night camping trip to the nearby Willamette National Forest, a tract of land the size of New Jersey. We had planned to stay in the vicinity of Elephant Rock, but one lane of the road had fallen off the mountainside a mile from our destination (the road is shown in the first photo—note the horsetails growing in the nearly vertical slide area), so we walked to it instead. That night, as always, we slept in the van on an abandoned logging road. The next day, we set out for Windy Pass, but snow turned us back at 4,100 feet (1,250 meters), so we decided to drive to the top of a small mountain for the night. Near the summit, a crosswise section of the road had sunk considerably (photo two—the gray area at the top of the photo is where the sinkhole reappears), and Peggy had to hit the brakes hard to keep from running into it. 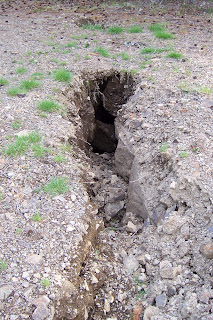 We are accustomed to deteriorating roadways along with other backcountry travel hazards. For example, I frequently have to clear the road of rocks, and I carry a bucksaw and loppers for fallen trees and branches. Yet, our most common challenge is that the downhill side of a road will have slumped in preparation for collapsing altogether. Logging roads are often too narrow to avoid driving over slumps, so since Peggy prefers to drive (leaving me free to navigate and to remove obstacles), I will sometimes get out and guide her. If she’s worried that the road might collapse while she's on it, she’ll have the dog get out too. As she drove over one such slump on this trip, the van was so tilted that the rear wheels slid sideways. I would prefer that she be the one to get out when there's danger, but Peggy's unwilling to give up the driver’s seat unless there's much maneuvering to do. I tell her that I will never live down the embarrassment of headlines that say, "Local Man Saves Self, Allows Wife to Perish in Horrific Fall from Mountainside," but Peggy is nothing if not obstinate.
Our 3/4-ton van only has two-wheel drive, but it’s high off the ground and will take us down some hellacious roads if there’s not much mud or snow. We learned early on that it’s worthless in slippery conditions due the fact that there’s not enough weight on its backend to give it adequate traction. On one occasion, we made it most of the way up a long icy hill only to slide nearly to the bottom. As we slid, the van started to leave the roadway in the direction of a precipice making it necessary for me to jump out and push it sideways to keep it from going over. I don't know how much good I actually accomplished, but it was all I could do. Peggy kidded me about abandoning her and the dogs, but if the van had fallen, it would have taken me with it. 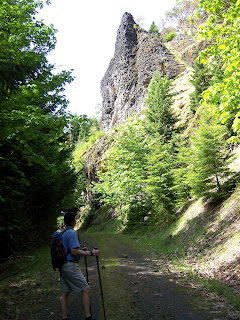 You might wonder why we drive such bad roads. It’s because we value solitude. On our recent trip, we didn’t see or hear anyone from the time we left the paved road on Wednesday until we regained it on Friday, yet we were never more than 35 miles (56 km), as the crow flies, from town. In fact, we could sometimes look back and see town with its metro area of 352,000. I spent most of my life in the country before I realized that I’m a city boy at heart. Even so, I need wilderness, and Oregon gives me that. Of course, in real wilderness, there are no roads, but my days of faring hard and liking it are over. In fact, we came back from this trip so sore and tired that I’m wondering how much longer we can continue to camp. It’ll be a sad day when we have to give that up. 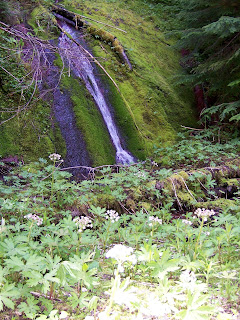 All photos are from this trip, and were taken in the Old Cascades, a 40-million year old chain of igneous mountains that parallels the younger High Cascades, several volcanos of which are expected to erupt again (Mt. Saint Helens being a recent example). The columnar basalt rock formation and the waterfall in the bottom two photos are unnamed because such beauty is so commonplace in Oregon that it's considered unworthy of note. Waterfalls in particular often number several per mile, although most of them are seasonal. The flowers in front of the one pictured are coltsfoot.