"Nothing ever becomes real till it is experienced." Keats 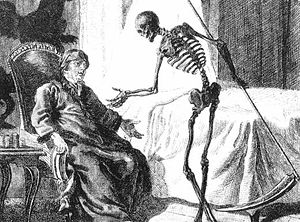 I was in the kitchen last night when I was suddenly so overcome by the fear of death that I couldn't have felt much worse had I been on the threshold of being violently murdered. I forgot that I ever felt any differently, and I wondered why I hadn't long since killed myself simply to escape my terror of dying. I recalled that before Hemingway blew his head off with a shotgun, he had tried to throw himself into an airplane propeller, and I imagined that I was experiencing a taste of that same desperation.

A few minutes later, I put on a Czechoslovakian film called The Cremator, which turned out to be the darkest, scariest movie I had ever seen, and the fact that it was also brilliantly funny only made the horror worse. Indeed, I had to steel myself to remain in my chair. Then, I remembered that I had eaten some marijuana an hour before the fear started, and I realized that my emotion had been drug-inspired and wasn't really the totality of my life. Marijuana exacts a price for its insights, and if I use it when I'm already upset, as I did last night, the result can be such that I wouldn't hesitate to call it insanity. I survive such times simply by riding them out. I was afterwards exhausted but couldn't sleep so I took an Ambien. It is now the next afternoon, and I've been weak, dizzy, and anxious, all day. I just took a large dose of marijuana because I want to see where it will take me when I am already in such a state.

You probably read that last sentence in horror and with the question Why?! in your mind. My answer is that I am on a quest in the realm of ultimate reality, and marijuana untethers my consciousness so that I can free associate a hundred times more effectively than usual, and the result of this free association is oftentimes new insights. As you might imagine, given that I'm an atheist, I hesitate to use the word quest because many are sure to assume that such adventured are spiritually inspired and, if successful, will lead to God. My conclusion has been just the opposite.

Why is this, do you think?

People usually undertake spiritual quests with a pretty good idea of what they're going to experience, and this determines what they do experience. I came at my quest from the opposite direction, that is I started with faith and lost it. That's the thing about spiritual quests, once you give up your preconceptions regarding the nature of ultimate reality, you don't know where you're going to exit the rabbit hole. I know where I exited, and it is here that I will make my stand unless something unexpected happens. What I mean by this is that I try to be open to what many of you call spiritual realities, but the only reason I see to think they exist is that so many people believe in them.

Why doesn't the firm belief of millions of people over thousands of years lead you too to believe?

But, if your conclusion is that the spiritual realm is imaginary, why are you still on a quest?

The fact that spirits don't exist doesn't make reality less profound or the search for the best ways to live and think less meaningful. In fact, I think the opposite could be true, and here is why. For those who believe in a wise, powerful, and benevolent spiritual realm, the goal is to live in consistency with the desires of that realm just as a child lives in consistency with the desires of its parents. This usually results in a high degree of conformity among those who put their trust in a particular book or teacher. By contrast, I am alone in the darkness with no one to guide me. I say that I am alone because it truly is my road to travel, and the fact that others have traveled it hasn't proven to be of much benefit to me. I can only have confidence in that which I experience because it is only experience that seems real, although I can never be sure that it is real. I just know that it's the only light that I have to go by. As I live it, atheism is stark and bleak, but it is hardly shallow. However dismal the lessons, the quest itself is its own reward.
Posted by Snowbrush 19 comments: