Not a potty dance at all 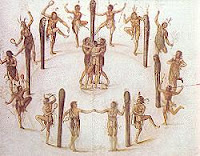 The ophthalmologist said I am in the clear. My eye and the top of my head still hurts, but not terribly much.

I have been off Zoloft for two or three months now, and am hopefully done with the worst of the withdrawal symptoms. Peggy was initially happy that I can enjoy music again, but she hadn’t counted on how different our tastes had become. I like reggae and other forms that I don’t even know the names of. Yesterday, I was dancing to American Indian music while I worked on a project, and either the music or my dancing drove her from the house. She says my every dance looks the same, and that they all look like a potty dance. Since I am part Indian, I argued that this is just how “my people” dance, and I threaten to report her to the authorities for committing a hate crime.
Posted by Snowbrush 2 comments: