The first time in a long time 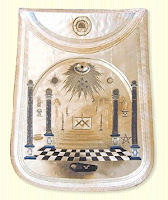 My Odd Fellow’s lodge secretary called today to ask if I would be willing to take his job. The irony of most organizations is that, if you are a non-attending member, they don’t ask anything of you, but if you attend even a little, you are expected to assume more and more responsibility. This was the main reason I stopped attending my Masonic lodge.

Speaking of Freemasonry, I went to lodge tonight for the first time in years. My home lodge has since combined with another lodge (due to falling membership), and the other lodge meets but a few blocks from my house. I only recognized one of the brothers, but this was enough to enable me to avoid an investigating committee. No matter what such a committee had asked, I probably wouldn’t have known it, my memory of Masonry being so fuzzy. I took my membership card, and I remembered the distress signal that is supposed to bring all Masons within sight or sound to my aid, so I knew that the two together would get me in.

A story that came down through my father’s family has it that one of my uncles from the Civil War era was about to be executed by the military when he inadvertently gave a Masonic sign that inspired an officer to save his life. After the war, he became a Mason and went all the way to the 32nd degree. My father, who knew almost nothing about Masonry, was most impressed by this achievement, because he thought it came as a result of hard work and dedication. Well, not really. Only the first three degrees require a lot of memorization.

The applicant learns the material by hearing the answers from men who volunteer to teach him, and then repeating those answers until he gets them right. His only written aids are books that contain the first letter of every word. When he becomes proficient, he is tested in lodge. When he finishes all three degrees, he is a Master Mason and can attend the basic unit of Masonry, the blue lodge. Afterwards, he can—if he chooses—go into the York Rite or the Scottish Rite (or both), the former being for Christians only, and the latter being for any Mason.

Masonry has a rich mythology and symbolism. In fact, there are books that contain nothing but Masonic symbols. As for the mythology, most of the blue lodge work centers on the building of King Solomon’s temple. I don’t respect tax-and-spend kings and the monuments they erect with their ill-gotten gain, but the stories were interesting.

Mostly, I was happy that the Masons still make a man work to get in, because the Odd Fellows have relaxed all such requirements due to their desperation to attract new members. The problem is that few of the new members in my area give a damn about the fraternity. They come for their initiatory degree so they can gain cheap access to the Odd Fellow campground on the coast, and we never see them again. I’ve railed against admitting them, but mine is a lone voice—my brothers maintaining the hope that, at some point, they will attend lodge.
Posted by Snowbrush 2 comments: