Some people scrounge; others just collect 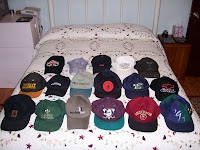 Yesterday was a good day for a scrounger. First, I ate a piece of toast that someone had left in a restaurant (I dunked it in my coffee); then I found a pair of perfectly good socks under a park bench (socks were actually on my shopping list); and lastly I spotted some votive candle holders on a curb (I’ll use them for shot glasses).

“Ha!” I said. “In my family, they did. In my family, the ones without class went straight to the dump.” THAT’S low class. Finding stuff around town is serendipitous. (I don’t really think it’s low class to get stuff from the dump—I think it’s damn efficient—but I was trying to impress Peggy.)

“Hey, you didn’t tell me the light changed!” Peggy yelled as a car barreled past. She was prying a penny from the asphalt as we spoke, and I was standing on the curb where I was supposedly warning her of oncoming traffic.

“Shit, Peggy, don’t you go hollering at me. It’s not like you got run over or something!”

This reminds me of a funny story about Peggy—after 38 years together, I could tell you A LOT of funny stories about Peggy.

Peggy abruptly stopped her bike one day when she saw a penny in the bike lane. The biker who rear-ended her was pretty upset, so Peggy lied about why she stopped. Another time, Peggy was going somewhere with Shirley when she saw a penny at a gas station. She had Shirley drive round and round through the pumps until she saw it again. Naturally, the station’s bell kept going off, which, for some reason, seemed to piss off the man whose job it was to answer it.

Peggy isn’t a scrounger though; Peggy is a collector. A collector only picks up things that aren’t good for much, things like beads, pennies, matchbox trucks, and squished rings from Cracker Jacks’ boxes. A scrounger picks up things he can actually use. I especially like baseball caps because I wear one almost every waking moment. Peggy worries that I’ll get head lice—and give them to her—but the risk seems worth it.

I think that what is really low class is waste. I would even say that waste is worse than low class. I would say that waste is a sin. I went to a talk about mysticism at Unity Church last week, and the leader gave out ten-page single-sided handouts. I was horrified. Not only does double-sided printing save resources; it saves filing space in the event that anyone wants to keep the handouts. I was also horrified because Unity claims to teach a better way to live. Well, duh.

Another time, I was in a writing group when a woman read an essay in which she trashed loggers. She gave everyone single-sided copies of her essay. What was she thinking—besides how superior she felt to all those damn loggers?

My Dad was a scrounger, only it got out of hand when he was old. He would bring home things like broken baby cribs, things that took up a lot of room and didn’t even have parts that could be used in other things. When I moved him from Mississippi to Oregon in 1992, I spent weeks getting rid of it all. Everyday, I would take one truckload to the dump, one truckload to the junkyard, and set aside another truckload to sell. What upset me most were the scores of worthless (to him anyway) magazines that he had paid money for, magazines like Mademoiselle and Working Mother. He thought they would give him a better chance to win the Publishers Clearinghouse Sweepstakes. When Ed Mahon—Johnny Carson’s sidekick who advertised for Publishers Clearinghouse—died last month, my only thought was that I hope there really is a hell, and that Ed Mahon is in it.

To waste means to hold in contempt. The problem is that we all do it. I live in a 1,250 square foot house that has a double garage and sets on a fair-sized lot. All of the houses in my neighborhood are about the same size, and most were occupied by families of three to six people when they were built in the 1950s. Now, most of them contain widows or divorced people. I’ve asked several people who raised their families in my neighborhood if the houses seemed small back then. They all seemed surprised by my question, yet today, anything less than four bedrooms and two baths would seem small.

There really is no end to how much we want, because as soon as we get one thing, most of us start thinking about how nice it would be to have something else. I think 1,250 square feet is too big for a couple, but Peggy disagrees. Ten years ago, I talked her into at least looking for something smaller, but everything that was smaller was in a rundown neighborhood. People who couldn’t afford big houses apparently felt too discouraged to take care of the houses they could afford. Yet, when you think about it, the smaller the house, the easier the maintenance.

I think that, as a culture, we’re going to remain wasteful until something from outside stops us. Here’s why I think that way. Take the average overweight and under-exercised person. If that person develops serious health problems that can only be cured by weight loss and exercise, he or she is probably screwed. Now, extend the unwillingness of the individual to deal with problems that imminently threaten his existence to those problems that will threaten society as a whole a generation from now, and tell me what the odds are of voluntary change.

I have a friend who says that the problem isn’t waste per se, but the ever-growing number of people who are doing it. In his view, this excuses him from changing how he lives. I would consider waste to be an act of contempt if I was the only person on earth, but he’s probably right in a purely practical sense. Yet, I think we’re obliged to do what we can to better the situation we are in rather than to simply bemoan the fact that a better situation doesn’t exist.

There used to be a story that circulated the Internet about a little boy who was throwing stranded starfish back into the water (I don’t remember how they got out of the water—maybe a hurricane). A wizened old man came along and pointed out that, given the thousands of starfish that were stranded, the little boy wasn’t making a big difference.

“I guess I made a big difference to that one,” the kid said as he threw yet another one into the water.”

That’s the way I see it. I didn’t scrounge a pair of socks or a set of shot glasses. I respected them by rescuing them from the garbage. It wasn’t much, but it was something, and I treasure such finds far more than anything I could buy.
Posted by Snowbrush 47 comments: