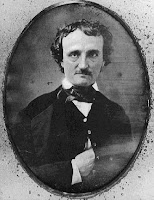 A Dream Within a Dream
Edgar Allen Poe
Posted by Snowbrush No comments: