Of cats and gods 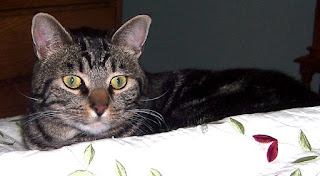 I thought having a dog was neat. I thought having a woman was cool. Then I got a cat. He ignores me. He treats me like scum. Half the time, he walks away when I try to pet him, only to stop after three feet and lick his ass. Dogs are now nothing to me, and women are even less. I just wish I had forty more cats to treat me like garbage. They would take me back to my childhood when I learned that God loved me despite my utter failure to deserve it and his total unwillingness to show it. No matter how much I needed some proof that he was real, no matter how much I pleaded for faith or reviled him for not granting it, he stayed behind a cloud.

“...the peace of God, which passeth all understanding...” the Bible

“Religion is the opium of the people.” Marx

In this post, I maligned my cat by presenting him as a stereotype. For that I humbly begged his forgiveness, and he graciously granted it.

This post was inspired by a reader who quoted the following Bible verse to remind me of the low opinion in which God holds that part of his creation which was made in his own image: “The heart is deceitful...and desperately wicked.”
Posted by Snowbrush 30 comments: