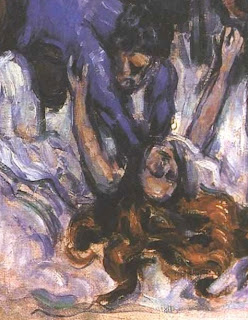 “We interrupt this segment of Boys Who Love Priests and the Girls Who Love Them to bring you a KXXX Special News Update. The Bare-Ass Strangler killed again tonight, striking the suburb of Safehaven at 8:14 p.m. with his usual lightning speed. When the 16-minute rampage was over, a 52-year-old bleached-blonde, her 100-year-old husband, and their 14-week-old schnauz-a-poo had been sodomized and slain. Bare-Ass first struck last November, and police have been trying ever since to piece together scattered clues as to his identity.


“On his popular cooking blog, the Strangler says he calls himself B.A. because it’s easier to say than Bloodthirsty Atheist. However, local fops started calling him Bare-Ass, and—thanks to us in the news media—the name stuck. Many area residents say they prefer it because they hate atheists so much that they’re unwilling to use such a foul word to describe the killer, who, whatever his faults, is believed to be one of their own and therefore not a real atheist.

“When interviewed, several local members of the clergy made statements similar to those expressed by Rev. John Calvin-Wesley of Sour Grapes Lutheran, during a texting interview with KXXX’s own red-head, Leeza Teeza: ‘This is just the kind of thing that folks can, like, expect from atheists, and such crimes are, like, sure to increase because when atheists had God thrown out of our schools in 1962, they, like, invited Satan in. Atheists don’t, like, fear hell, and this gives them the freedom to do things that the rest of us can only, like, dream about, things like anal sex with anything that has an anus, and serial killing across age, race, gender, species, and religious affiliation.’

“Mayor Bratfink has called for a community wide prayer service at Boiling Oil Stadium for the purpose of ‘…asking the Lord Jesus to sharpen the eye and steady the hand, of anyone with a .12-gauge or a 30.06 who is lucky enough to come within sight of Bare-Ass’s ass.’ Jews and Unitarians are also invited to worship Jesus at the non-denominational service, which is to be held at dawn next Sunday. Everyone is asked to bring an item of canned food that has expired, been dented, or lost its label. The cans will be given to the Mormon Church of the Immaculate Conception for its food pantry, which was burglarized last Wednesday. Missy Massey, a frizzy-haired spokeswomanman for the sheriff’s office texted the following from a casino in Reno where she is vacationing with Studs Score, the lead detective on the Strangler case: ‘A previously unknown gang of atheists is our only suspect in the burglary because no one else would be low-down enough to steal from Mitt Romney’s kind of church. The fact that absolutely no evidence has been gathered clearly suggests the diabolical cleverness of these atheists, who are believed to be under the direct guidance of Satan and armed with missiles, hand grenades, and assault rifles.’


“When Dr. Billy Ray Moddle-Coddle, the local NRA spokesman, was asked for his opinion regarding the firepower of the atheists, he said, ‘Unlike my former wives, automatic weapons give me a whole new orgasm every time I fire, and with Old Betsy, that’s 800 orgasms a minute, so I would just say that the only thing that can stop a bad guy with a gun is a good guy with a gun; and that if guns are outlawed, only outlaws will have guns; and that if atheists want to take away my Betsy, they’ll have to pry my cold dead fingers from around her sweet trigger, and I would just like to see them try because when it comes right down to it, I need a whole lot more long, hard guns and a whole lot fewer blood-sucking ex-wives.’

“We now return to our regularly scheduled programming.”
Posted by Snowbrush 4 comments: