What do I care? 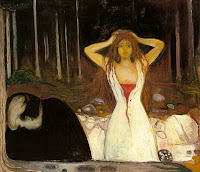 A woman was sobbing loudly and screaming at invisible people in front of the library today. I had been out all morning and was looking forward to getting home and eating peanut butter with homemade Parmesan crackers, so I walked on by. When I reached my bike, I looked back and saw that the only other person in the area was an adolescent boy who was beating a hasty retreat.

“Damn, I’m stuck,” I muttered. “Any other minute of any other day, and there would be a hundred drunks, druggies, pimps, whores, punks, Goths, hippies, skinheads, panhandlers, and homeless people standing around with their sleeping bags and pit-bulls admiring one another’s tattoos and nose-rings.”

“I’m having a panic attack,” she said when I asked how I might help. This didn’t fit with what I had witnessed, but I still felt relieved that she might not be out and out psychotic. She calmed down remarkably fast, so fast that I wondered if her hysteria hadn’t been a ploy to get my attention.

She sat on the edge of a concrete planter, and I sat beside her while she told me her sad story. To wit: her “boyfriend” neglected to tell her that he has AIDS, but she loves him anyway although he lost all interest in her after they had sex. Her “partner” doesn’t know about the affair, and she doesn’t plan to tell him because he would beat her up.

“Lady, you are just too stupid for words,” I thought. Still, I couldn’t bring myself to leave, at least not yet. I had decided to help, and, by god, I was going to do it—for five more minutes anyway.

She said she had walked for miles hoping to work the virus out of her system before it put down roots. She asked if drinking a lot of water might wash it out. I said I doubted it, and I then made an unforgivably practical suggestion about going to White Bird Clinic to be tested, and I tried to console her with the thought that she might not have AIDS anyway, but even if she does, people nowadays live for years with the virus.

When I finally got up to go, she thanked me sarcastically “for making fun of a serious situation.” I hadn’t done this, so I figured she was just trying to provoke me into staying, but I honestly didn’t care. The fact is that I never cared. I had done my duty as I saw it, but my heart was at home eating peanut butter on homemade Parmesan crackers.

Maybe you would have cared. Maybe you would have listened without passing judgment, but I can’t imagine how. I really can’t. The only way I can feel warm and fuzzy toward my fellow human beings is to not be around them very much. Still, if you would have cared, I hope it’s you who stops to help on the day that it’s me standing in front of the library screaming at invisible people. Not that I am given to such theatrics. No, not me. I realized when I was a little boy with a screaming sister that screamers get all the attention but none of the respect, and I came to hate them on both counts.
Posted by Snowbrush 72 comments: