The world as surreality 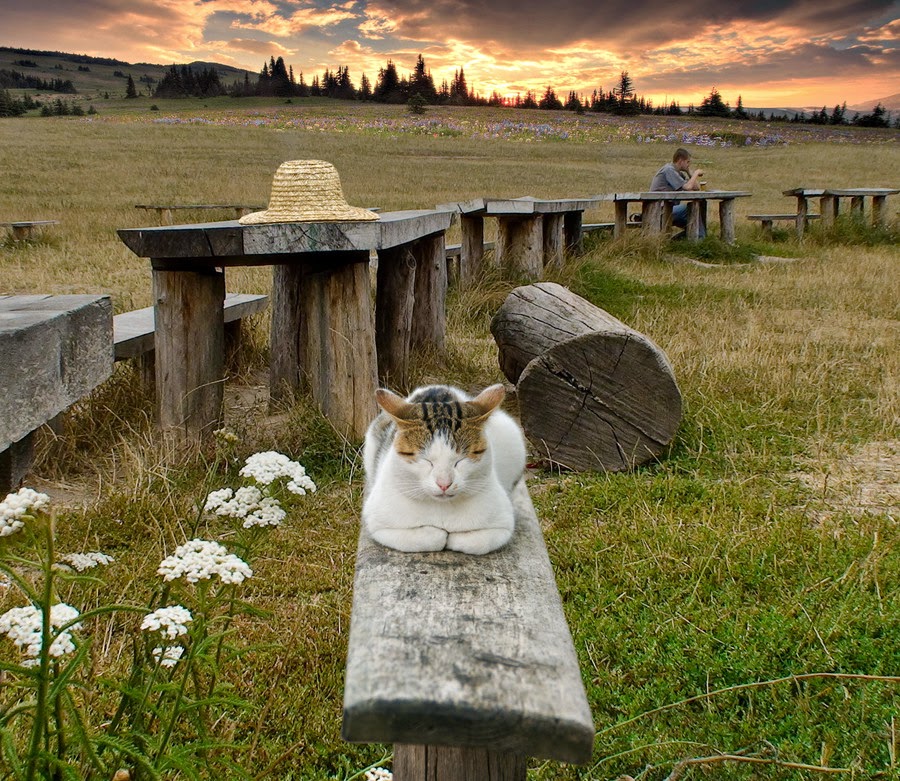 I marvel at the perfection of this photograph. Was its juxtaposition of seemingly unrelated images casual or planned, irrational or brilliant, and what was going on inside the head of the cat? I gave up marijuana because it had come to make my world so weird that I would get lost in my mind, yet I find myself seeking out marijuana-like experiences that cause me to get lost in my mind, experiences that are more intimidating than marijuana because they take me so far adrift that I can never quite return to where I started.

Few people would be strongly affected by this photograph. Cat-lovers would smile and find it relaxing, while cat-haters would become so fixated on the object of their hatred that they would be blind to everything else. I find it as deep, mysterious, and frightening as a glimpse into the far side of the universe. It leaves my stomach weightless, and it saddens me more than the photo of that naked Vietnamese girl, the execution of that Vietcong man, or the planes crashing into the twin towers. While they merely speak of the cruelty, shallowness, stupidity, terror, and misery of my species, this photograph juxtaposes mortality and infinitude, contentment and isolation, beauty and meaninglessness, perfection and casualness, mundanity and ethereality, superficiality and depth. It pronounces life as the purpose of life.

...I’ll let you in on a secret. I have often felt both inferior and superior to everyone around me, but with the passing years (but especially since I broke my back on November 30), I have come to compare myself to others less, my more recent feeling being that I have simply moved to a distant realm, and am therefore limited in my ability to relate to them, or them to me.

My goal with hallucinogenics was to feel as I do now, but having achieved that goal in the absence of drugs, I miss normalcy, and I worry that I might eventually travel so far that I'll be permanently alone in the universe. Indeed, I am already alone—just as we all are—but it’s one thing to be a certain way and pretend you're not, and another to be unable to forget that you're that way. I see others as through the wrong end of a telescope. Inside my head, worlds collide, and I am in wonder that no one hears them. I have no ground on which to stand and no voice to guide me. Maybe this is wisdom, or what some call God, or borderline insanity. I just know that it is interesting but not fun, and that it seems far from safe. Rather, it is reminiscent of the insights that one might expect just before death when the things that one spent a lifetime fretting over have ceased to matter. Ironically, I conduct myself much as before because I live a contradiction between what I know of the groundlessness of reality versus the only methods I know—or used to think I knew—to achieve security (possessions, orderliness, leisure, intimacy, projects, exercise, time outdoors), and I so crave security that I would do anything to possess it, even sacrificing my integrity if such a thing were possible. Unfortunately, perhaps, I possess an integrity beyond choice, an integrity for which I can no credit and that, like everything else about me, will soon be extinguished.

“…Waking at four to soundless dark, I stare.
In time the curtain-edges will grow light.
Till then I see what’s really always there:
Unresting death, a whole day nearer now...” —Philip Larkin

I saw my internist last week and, at my request, he prescribed Cymbalta. I’ve had it before, but I don’t think I was on it for long, and I’m not even sure I worked up to a full dose. Until a few months ago, when it went generic, Cymbalta was expensive. Even now, it will cost me $205 a month ($42 after my $360 yearly deductible), which isn’t a lot—as drugs go—but it is one more expense added to many such expenses (I just paid $1,400 for an adjustable bed), so I debated long and hard whether to ask for it. If it works, it will even me out while at the same time reducing my pain. Pain alone can made a person crazy, and I’m tired of being crazy. I want the insights that come with pain and the proximity of death, but I need respite from the weirdness, yet I worry that the drug will numb me because that’s what such drugs have done in the past. They build a floor that keeps me from the pit, but they also impose a ceiling that shuts out the stars. I regard Cymbalta as my last resort because no other drug has so great a potential to alter both pain and mood, and because I don’t know what else to do, having tried many things over many years.

I read a book about Sigmund Freud recently, and the author made what to me was the strangest comment. He said that Freud was so troubled that he reflected upon death everyday, to which I thought, Only everyday?

“I fear no foe with thee at hand to bless. Ills have no weight and tears no bitterness. Where death thy sting; where grave thy victory?” Henry Francis Lyte

“Boris: “Nothingness. Non-existence. Black emptiness.’
“Sonia: ‘What did you say?’
“Boris: ‘I was just planning my future.’” —Woody Allen

My diminishing number of posts is not due to unwillingness to share but to an absence of words and confidence. If the gulf between myself and others is such that I can’t make myself understood about things that I once felt sure I could express, how can I make myself understood about things that I’m sure I can’t express, and in which, to put it bluntly, I don’t think there’s much interest anyway. 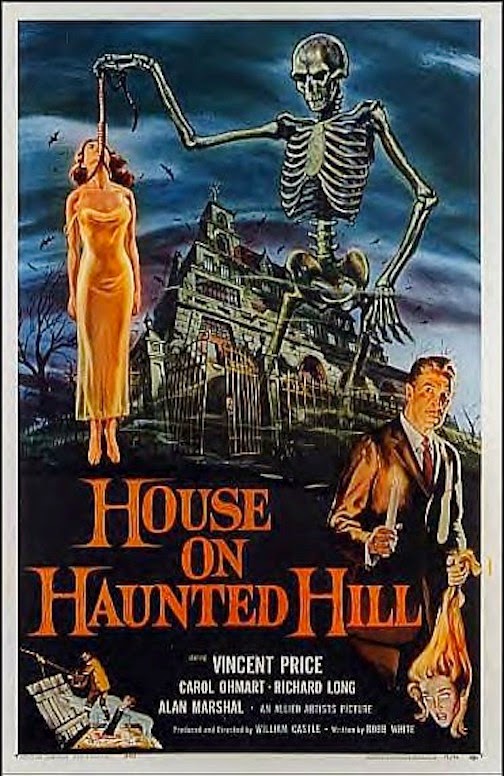 I saw all I could stand of House on Haunted Hill last night, shocked that such a boring and silly movie could have had such an overwhelming and lasting impact on me in 1958 (unless I was an entirely different person then, and I don’t think I was). I interpreted my opposing perceptions to suggest that an equal amount of change might still be possible for me in a mere 75 minutes. Then I remembered that 75 minutes is an enormous amount of time, it having only taken a second for me to fall out of that tree on November 30, and even that was a veritable eternity given that more change can come into a person's life in a millisecond than in the rest of life combined.

This is the kind of statement that leaves atheists cold, but due to my need for security (taking such a view would permit me to overlay my humanity with a superior persona that would allow me to transcend a portion of the pain), and my desire to be fair to people whose beliefs differ from my own, I tried to discover how Chardin defined spiritual being so that I could make sense of his statement, but so far as I know, he never defined it. I angrily wondered if he had knowingly devoted his life to promulgating an undefined concept, and this left me to suspect that his statement was nothing more than rhetorical pablum, by which I mean an utterance that could only be considered deep and comforting by the shallow; sort of a counterexample of the profundity with which House on Haunted Hill impressed me when I was nine.

As I continued to ponder what he might have meant, it came to me in the wee hours that spirit is consciousness in the absence of matter. This is surely obvious, but since I had never put it into words, I was pleased with my 3:00 a.m. perceptiveness until it struck me that such a definition is no better than defining a unicorn as a flying horse with a horn on its head. To envision what something is, doesn’t suggest that it is, although, to be strictly honest, many things—everything, really—exists without me having a clue as to what it is, how it came to be, or even how it can be; I only know how things appear to me, and I am losing even that. To live with awe and wonder is entertaining, but to live with nothing but awe and wonder has removed the earth from beneath my feet and left me nauseous and floating.

“And then all of a sudden, there it was, clear as day: existence had suddenly unveiled itself. It had lost the harmless look of an abstract category: it was the very paste of things..., this [chestnut] root was kneaded into existence. Or rather the root, the park gates, the bench, the sparse grass, all that had vanished: the diversity of things, their individuality, were only an appearance, a veneer. This veneer had melted, leaving soft, monstrous masses, all in disorder—naked, in a frightful, obscene nakedness… All these objects . . . how can I explain? They inconvenienced me; I would have liked them to exist less strongly, more dryly, in a more abstract way, with more reserve.” Sartre

Thus did Sartre define what it means to me to be really high. It is not a good place to get stuck, but I am stuck, and the proximity of death makes it impossible for me to come down.

“…existence hides itself. It is there, around us, in us, it is us, you can’t say two words without mentioning it, but you can never touch it.” Sartre

This illustration of Shiva describes my visceral sense much of the time. I debated sharing it because I recognize it for what it is, a visual trick, a manipulation (as its title, Shiva Optical Illusion, suggests), and therefore a dishonesty and a seemingly adolescent dishonesty at that. Yet, I include it because, like the first photograph, it conveys with imagery what I can't say with words, and because I suspect that all art--and literature--represents an effort at manipulation. Indeed, most of what we do amounts to the manipulation of ourselves, of others, or of both, and those who least succeed at this are likewise the least happy, the least successful, and the least long-lived. Too much honesty (more than is practical) is an evolutionary dead-end .


As with the photo at top, I am sad to say that I can't credit the creator of "Shiva Optical Illusion." I only know that he calls himself Vishnu108, that he's a Hare Krishna, and that his work can be found at deviantART.com.
Posted by Snowbrush 24 comments: