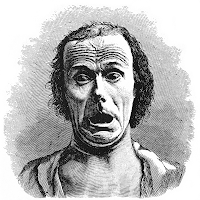 Vicodin and Percocet make me itch, so I asked surgeon Mark for something else. He prescribed Norco, but the druggist objected that Norco is the same thing as Vicodin only stronger. I next got a prescription for Demerol.

Because I’m a practical man and because I had a bottle of Percocet left over from the second of my three surgeries last year, I decided that, if I could survive the itching, I’d finish off the Percocet before I started on the Demerol. To accomplish this noble ambition, I take a Benadryl every time I take a Percocet, and this has gotten me by passably well. My scalp about drives me crazy, but at least I’ve avoided the total body itching. I was curious about the Demerol though, so I took some at church last week. I thought I was handling it tolerably well until I came home and nearly fainted on the pot. I still don’t know what that was about.

I immediately saw the wisdom in this excellent counsel, so I ordered my body to lean forward and stand in the same punctilious way it has always done, but it declined my command without so much as a, “Thank you, but no.” I kept resolving to get up, and my body kept ignoring me, and each time this happened, the prospect of getting up anytime in the foreseeable future appeared a little more fantastic until it seemed about as feasible as flying out the door and laying an egg on the roof.

I finally said to myself, “Well, I can go one of two ways. One way would be to freak-out. If I freak, I’ll probably start thrashing around (if I can even do that) until such time as I fall on my face and possibly rip my tendon in two. The second way would be to lower my ambition to that of simply enjoying my drug trip until such time as Conductor Demerol puts me off his train.” Being a child of the ‘60s and having seen from inside my head what a bad trip looks like, I naturally chose option number two. Only there wasn’t much to enjoy since the trip was neither especially bad nor especially good. It was just….well, it was what it was, which was basically sitting shit-faced in a chair for three hours.

I kept trying to at least think different thoughts (so as to not totally waste my time), but I found that I stayed stuck in the same groove. I can best compare the feeling to an intellectual “Ground Hog Day,” that being a movie about a day that repeats endlessly, only nobody realizes it except for one person. In this case, I was that person, but what good did it do me? I was stuck; stuck like glue; stuck like stink on a bloated corpse; stuck like fluff on a baby bunny.

I think there might be some wisdom in thinking of chronic pain as like a bad drug trip. If you throw all the energy in your emotional arsenal into defeating it, it will catch that energy and throw it right back at you twice as hard. This means that the only way to deal with the problem is to stay loose. So, with that in mind, let us pray,