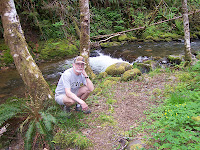 I didn’t feel old until a year or two ago. I attribute this sudden oncoming of antiquity to the pain. Except for misdiagnosed sleep apnea (which cost me two needless surgeries) and the pain of the last six years, I’ve been healthy as an adult. In fact, I used to marvel at my good health because I would — sometimes for months—feel such sadness that I was just sure it would eventually eat its way from my heart and into my flesh, causing me to sicken and die. The fact that I stayed in such good shape was curious to me.

Then came the sleep apnea, and I grew increasingly desperate over a period of five years until it was diagnosed and treated. Three years later came the pain. For the longest, I thought I would beat it. I told myself that my species, despite its many faults, is very clever in various ways, and that medicine has been one of the major benefactors of the explosion of knowledge that has occurred during my lifetime alone (I would have died had the sleep apnea hit 15 years earlier). How hard, therefore, could it be to eliminate my little old pain? It might be impossible as it turns out.

For much of my life, I held doctors on such an intellectual pedestal that if a doctor couldn’t cure me of something, I would assume that he wasn't trying hard enough—maybe he hadn’t run the right test or asked the right question. I later met doctors whom I trusted as good men as well as good doctors, and when they told me there was nothing they could do, I believed them. Even with this recent pain and the urging of one reader to see a pain specialist, I have no thought of seeing a doctor. For what? Pills? I’ve got pills, and if there were other pills, I would know about them. Dosages? If I want to dicker with those, I have more confidence in the Internet than I do in any given doctor (I've discovered two serious errors in my prescriptions by looking them up on the Internet). Tests? Diagnoses? Surgeries? I could probably get several more of each if I wanted to start from scratch with new doctors, but I don't.

Maybe my "barely edited" experiment is connected with my need to transcend the pain because while I've lost all hope of escaping it completely, I haven't lost faith in my ability to someday live well despite it. I think at least one of you might have worried about me euthanizing myself after my last post, but I wouldn’t do that. I thought a lot about it for a long time, and I must have decided against it because I don’t dwell on it much. Not that I was ever really close to suicide; it’s just that I considered it a reasonable and reassuring option. If you hurt as I do, and you killed yourself, I could respect you for it if you only had yourself to think of (If you were married, I would consider it necessary for you to get your spouse's blessing to kill yourself it unless your spouse opposed suicide on principal). But even if you were alone or had your family’s blessing, I would suggest that you hang in there. You’ll be dead-meat in a few years anyway and you'll stay dead for all eternity, so why not stick around? You might do some good, you might have a few laughs, and you can always decide to off yourself later.

The photo is of me, from yesterday. It did me good to go to the woods.
Posted by Snowbrush 20 comments: